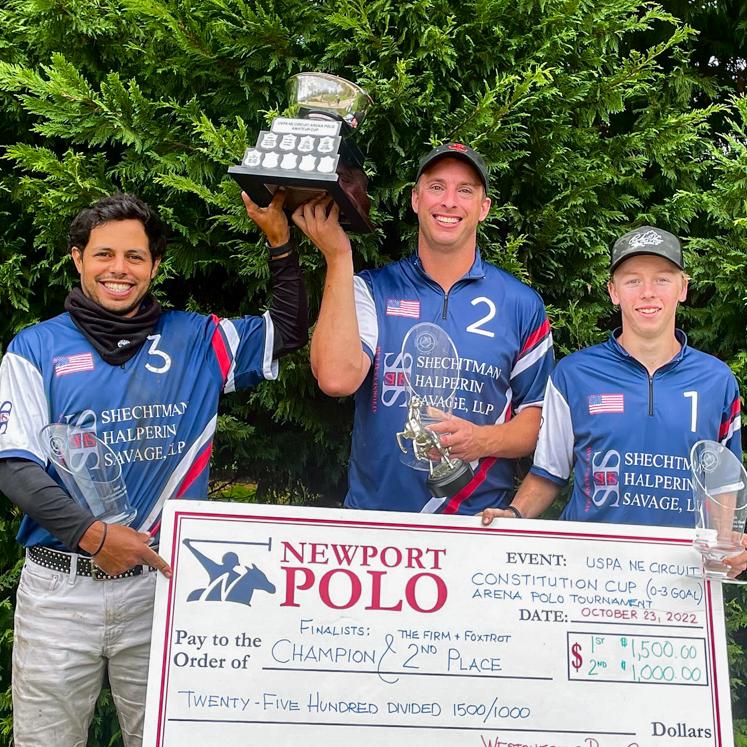 The highly anticipated USPA NE Circuit Constitution Cup (0-3 goal) arena polo tournament delivered a competitive, top flight tournament from start to finish. Four teams of maximum handicap from among the Northeastern Circuit of polo clubs assembled on the October 22-23 weekend at Newport Polo's private arena training center in Newport County to make their bid for $2500 in prize money, mantlepiece trophies, winners names etched onto the perpetual trophy and a yearbook page in the United States Polo Association annual blue book to live on in polo history.

USPA Circuit Tournaments present an ideal forum for regional competition, for polo players looking to continue their season of competitive polo after the grass season has ended, while conditions are ideal to still travel and play outdoors during the best time in New England. Mild weather and peak Fall foliage color in Rhode Island is mid to late October.  Players will also earn points to qualify for the USPA National Arena Amateur Cup (details: https://bit.ly/3C6AmSb).

A random draw took place during weekday chukkers in the days before the tournament began to determine Saturday's Semi Final Round match-ups.  As a result, Semi Final I on Saturday featured The Firm in navy blue jerseys fielding Cole Kinsella, Chris Fragomeni and Oscar Monzon against Tenacious Divas Leslie Streuli, Charlie Bullis and Lucio Chavez in light blue, for a 4-chukker single elimination match, where the winner would advance to the Championship.  With both teams evenly handicapped at 3 goals, USPA umpire John Bianco officiated over the 4 chukker match, during which The Firm held the lead through all four periods, 2-1, 6-2, 8-5, 11-9, withstanding a strong second-half surge by Tenacious Divas who outscored the Firm but ultimately fell short in the final tally of points. High scorers in the match were Monzon and Bullis, each with 7 goals.

Semi Final Game II opposed Foxtrot's Roger Souto, Dan Kinsella and Rory Torrey in white jerseys against The Avery's Touba Ghadessi, Minnie Keating and Dan Keating in maroon jerseys for another single elimination 4-chukker contest in which Foxtrot took an early lead and maintained it across all four periods, 3-2, 7-3, 9-6, 13-7, bolstered by two 2-point goals from Torrey, but also gave away 14 penalty hits - 7 in scoring range but fewer than half were converted to points - against The Avery's 2 penalties. High scorers were Torrey with 8 points and D Keating with 5.

On Day 2, the Runner Ups Tenacious Divas and The Avery lined up at the center of the arena at high noon for the Consolation Round, to determine 3rd and 4th place. Umpire John Bianco bowled the ball into play, as the two evenly handicapped teams fought tooth and nail in the closest matchup of the tournament.  While first blood was drawn by the Divas, The Avery was a 1-point leader through the first half, leading 3-2 and 4-3. The Divas doubled down in the 3rd chukker to tie the score, leaving the 4th chukker for all-out campaigns from both sides scoring back and forth, as the Divas matched The Avery stride for stride, with the winning goal scored by The Avery in the final seconds, 11-10. High scorers were Bullis with 8 and M Keating with 7 points including a 2-point field goal.

Finalists, The Firm and Foxtrot lined up at 10am for the Championship match, well ahead of the threatening weather forecast of incoming afternoon showers.  The Firm took a commanding lead during the first two chukkers, 7-3 and 12-4.  Foxtrot made a strong comeback in the second half, matching The Firm goal for goal in the 3rd period, trailing 15-7, and outscored The Firm in the final chukker, but ran out of time to overtake The Firm's first half lead which held up for the 18-11 victory. High scorers for each team were Monzon with 9 and Torrey with 7. C Kinsella scored a 2-point field goal in the match.

Winners Trophies were presented to The Firm; MVP was Chris Fragomeni, while Rory Torrey's pony, Sister won Best Playing Pony. The Firm took home $1,500 in prize money and Foxtrot received $1,000.  Inaugurated in 2018, the perpetual USPA Circuit Arena Champions Cup will be engraved with The Firm as its newest champions, and likewise the tournament winners will have a dedicated page in the USPA annual yearbook (past winner p.429). Video footage of the games are published on Newport Polo's Youtube channel at this link.

Newport Polo is grateful to the United States Polo Association for its support through tournament stimulous initiatives, and thanks the competitors for their participation, as well as the dedicated staff and club volunteers for their collective efforts in producing the event.

Players have been tuning up across the concentrated Northeast hub of polo clubs since the beginning of October - which marks the annual transition from grass polo to arena polo - including at Newport Polo where competition is in high gear at the Club's outdoor arena & training facility in Newport County, Rhode Island.   The regulation outdoor polo arena has professional footing, grading and night lighting for arena polo 6 days per week in October, November and into December until the ground freezes, with lessons, chukkers, scrimmages, official games and tournaments for club members, intercollegiatae and interscholastic teams and up and coming new players.

Newport Polo's tournaments and arena polo season will continue as Prize Money and Friendly Competition beckon during the Autumn Arena Polo season, with the Halloween Scrimmage for interscholastic players, the Naval War College Presidents Cup, the NE Circuit Women's Arena Challenge and the annual Thanksgiving Cup still ahead.  Sign up to stay current on the Club's upcoming polo activities and get in the game!