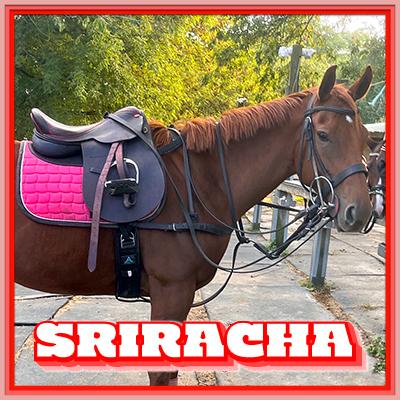 Over 120 entries with names running the gambit from mundane to fanciful, and more than a few submitted in tribute to Her Majesty, Queen Elizabeth, were all hopefuls in our recent contest to name our newest polo pony in training.  One standout was hot off the judges' lips.  Sriracha, submitted by Savannah of Newmarket, NH, is raring to go in the tracks of Spice Girls greats, Ginger, Pepper, and Sugar, as she strides into her multi-year training to join the Newport International Polo Series elite equine athletes.  Savannah will also join the pantheon of all-stars with her newly minted Member Season Pass and be first in line for Priority Access to the 2023 Box Office.

"The polo ponies are the real stars of the show," remarked Newport Polo Founder and President, Dan Keating.  "It has become tradition for our fans to name our youngest arrivals who are just embarking on a polo career and a fun development to see this year's entries pick up on the Spice Girls theme started nearly three decades ago with the OG, Ginger."

Runners up in the contest and all of our fans can get their '23 Passes and Priority Access to Tailgate & Chalet reservations during our Pre-season Sale.  Also available are Polo Party reservations for groups of 20+ to get a headstart planning while the most options remain available.  Both are limited opportunities.  We look forward to welcoming our loyal fans who make the Polo Series part of their weekly summer ritual and playing host to singular gatherings for social, business, and special occasion celebrations in 2023.

The Newport International Polo Series will open on Saturday, June 3, when USA faces the first international challenger of the season.  Matches continue every Saturday through September, featuring teams from around the world and major U.S. cities challenging the home team, USA/Newport.  Fans can expect to see annual favorites return in the upcoming season, along with a debut or two, and rivalries rekindled from past teams not seen in many years.  2023 match dates are already available below and in Events/Tickets.

Expect an exciting lineup of field-side special features and unique events to match the action on the field.  Favorites like the weekly door prize drawing, Best in Show Contest, Apres Polo events with the teams, meet and greets, and other opportunities to join the players while in Newport will abound.  Returning for the 22nd year, the International Polo Charity Ball will highlight Newport's summer social season on Friday, August 4, to welcome over 400 generous and fun-loving attendees for a red carpet entrance at one of the city-by-the-sea's captivating Gilded Age venues.

The complete schedule will be published in our January eMagazine, prior to the Box Office opening to the public on Feburary 1.  Stay current with announcements, the latest news, events, and more by private & spam-free subscription delivered monthly to your inbox.

Dating back more than 140 years in Newport, the polo matches are one of Newport's grandest & most popular traditions, a living legacy from the Gilded Age with the founding of America's First Polo Club in Newport. Open to the public, audiences of several thousand spectators enjoy contests against international teams, as well as teams representing major US cities, playing against the home team every Saturday, June through September at 5PM / 4PM in September.

Gilded Age Legacy:  Polo is, without a doubt, the oldest ball game in the world today. First recorded in the 6th-century B.C. when the Turkomans beat the Persians in the diplomatic tournament, the alluring game caught on with equestrian royalty and calvary, and took off with globalization, withstanding the tests of time. Arriving on Newport's shores during the Gilded Age, the sport had evolved for nearly 2500 years, steeped in tradition, captivating newcomers like Newport's summer sporting set who embraced the new pastime, establishing America's first polo club in 1876. A charter member of the United States Polo Association, the club today is still a trailblazing model polo club, hosting the Newport International Polo Series public exhibition matches, supporting philanthropic causes, organizing tournaments, polo club member services, and polo instruction year-round. Experience the king of games in its American landing at Newport Polo.