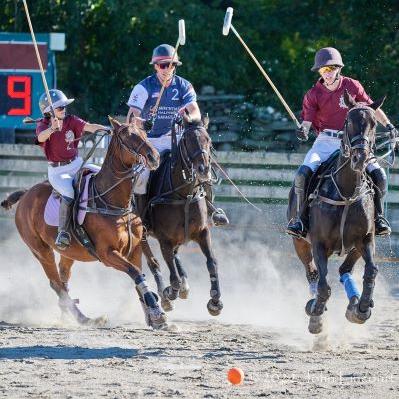 Our arena season started with nothing short of a perfect New England autumn afternoon. Players and ponies returned with excitement for our annual Players Tournament, hosted at the Newport Polo arena training center in Newport County. A tournament geared towards including members of all levels, it proves to be a highlight of the arena season, and never fails to spark enthusiasm for the forthcoming competitions planned for the fall months.

Dan Keating, our beloved president, lined the arena, while our players and grooms prepared the ponies. Agnes Keating called teams Foxtrot and The Firm to the arena for the start of the first semi-final game. The teams lined up at the center of the arena for the first bowl-in by umpires Minnie Keating and Oskar Monzon. Foxtrot was comprised of Becca Nordstrom at the #1 position, followed by Roger Souto at #2, and Dan Kinsella anchoring the team at #3. On the other side of the line-up, was Anna Dwyer at #1, Chris Fragomeni in the #2 position, and Dan Keating at #3. The Firm came out of the first play strong, scoring 4 goals in the first chukker to secure their spot in the lead. While Foxtrot fought hard, they couldn't quite gain the lead as The Firm proved their undoubted ability to put points on the scoreboard.

Our second game of the day proved to be an exciting one, ending in a riveting shoot-out. Team Polombia, comprised of Launi Perault and Peter Jenkins, splitting the #1 position, followed by Felipe Rojas at #2 and Lucio Chavez at #3, gave The Avery a fair fight, keeping them on their toes until the last moment. In the end, The Avery, made up of Touba Ghadessi at #1, Catie Reed at #2, and Cole Kinsella at #3 won in a multiple-round shootout, securing their spot in the finals.

The weather did not disappoint for the second day in a row, as teams prepared for the consolation and finals. Foxtrot and Polombia met at noon, in a consolation match that was equally as competitive and close as any other game of the weekend. Both teams fought hard for the win, and ultimately Foxtrot snuck ahead to win, 13-11. As the afternoon progressed, family and friends gathered to cheer on The Firm and The Avery as the teams took to the arena for the anticipated finals of our first fall tournament. Both teams played well, with fierce defensive plays and a steady stream of goals, keeping everyone on the edge of their seat. The Firm walked away victorious, with a well-deserved win. Trophies were presented, and snacks were enjoyed by the pony lines among teammates. Everyone was grateful for a weekend of perfect weather, celebrated by great games with friends and family. A perfect way to transition to the final season of 2022.

About Newport Polo:  Newport Polo is the home of the Westchester Polo Club, America’s first polo club est. 1876, and a charter member of the United States Polo Association, offering public exhibition matches, polo club membership, and polo instruction year-round. The founding members, who hailed mostly from Westchester County, NY, established the club's summer headquarters and polo grounds in Newport, RI where its members annually convened for summer recreation. The original club, based in Newport, is credited for organizing the world's first international polo competition, the Westchester Cup, and remained active until 1929. The Westchester Polo Club was revived in 1992 by President and USPA Delegate, Dan Keating. Known today as Newport Polo, the Club supports a vibrant polo training program, developing players in weekly polo lessons with open enrollment for new players, as well as membership for club chukkers and tournaments in spring, summer, and autumn. Click Here to read & subscribe for the weekly polo schedule with opportunities to play for all levels!  Newport Polo is also home to the Brown University Polo Team, and the Newport Varsity & JV Interscholastic Teams. Newport Polo also hosts the Newport International Polo Series, a popular summer exhibition series held annually on Saturdays, June - September.