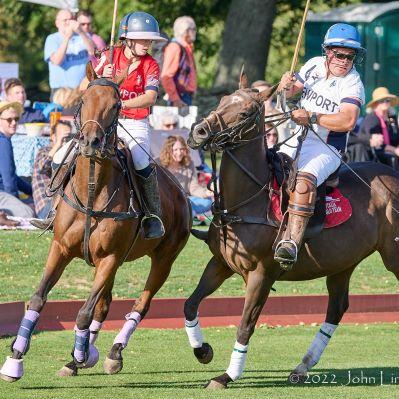 Our final match of this year was an epic battle of the sexes at the Newport International Polo Series 31st season, presented by Turkish Airlines.  It was a cool and crisp afternoon, perfect for a classic face-off to round out an amazing season. Spirits were high as players and ponies prepared to take the field one last time for the Turkish Airline Finals.

William Crisp, our beloved commentator, welcomed players and officials to the field for the start of the final match and the national anthem. The men marched triumphantly to their start points in the line up with Felipe Rojas and Peter Jenkins splitting the #1 position, followed by Peter Friedman in the #2 position. The team was backed by Leo Mejia and Dan Kinsella splitting the #3 spot, and Lucio Chavez at #4. Next up was the women's team. Leading the ladies in the #1 spot was the mighty Catie Reed followed by Georgia Markell and Touba Ghadessi splitting the #2 position. Megan Schulz and Minnie Keating anchored the team at the #3 and #4 positions to round out an impressive group of players.

The ball was bowled in, and the battle began. The first two chukkers were close and competitive as both teams put a single goal on the scoreboard. Just before halftime, the men snuck ahead with a goal from the field and a penalty shot successfully executed by Lucio Chavez. The final divot stomp was one for the books. Crowds flooded the field to soak up the last bits of September sunshine and enjoy a bubbly glass of Veuve Clicquot. The Pro Shop was bustling with patrons exploring the plethora of new cozy items, perfect for the encroaching cooler weather, while Vendor Village drew curious customers exploring the tasty food options for the day.

Both teams returned to the field to finish the second half of the game with vigor and high hopes. Leo Mejia kept the men in the winning position with two beautiful goals from the field. Between chukkers, Stella Artois Best in Show judges presented the award for the best cowboy-themed tailgate, to a festive group, decorated with western whimsy. The women fought hard throughout the last two chukkers, successfully scoring two penalty shots, executed impressively by Caitie Reed. Despite their best efforts, the women were unable to gain the lead and the men left the field victorious to conclude the final game of the season.

The final victory lap around the field was full of smiles and well wishes from the fans that make every Saturday game so amazing. Everyone gathered in front of the Pavilion Patio for the Veuve Clicquot Trophy Presentation and Champagne Toast. Turkish Airlines's Yasin Kapanci, GM Boston and Alper Gurses, Marketing Representative awarded the Providence Diamond player trophies to the winning men's team. The lucky winner of the long-awaited Turkish Airlines Grand Prize was drawn during the ceremony and thrilled to receive their winnings. A toast was made to all for a season well played, and the players dispersed among the crowd for the autograph signing and cocktail hour. Complimentary Gosling's Dark 'n Stormies were enjoyed in the Modern Luxury Lounge to wrap up an eventful and successful evening.