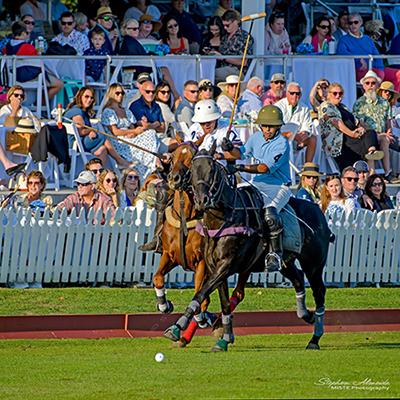 Polo world superpowers faced off in the final intercontinental challenge of the Newport International Polo Series 31st season, presented by Turkish Airlines.  The sun shone brightly across BD Field on the outstanding September day as a full house of enthusiastic spectators lined the pitch for the penultimate match of the year.  Inimitable voice of Newport Polo, William Crisp, was in top form as he welcomed players and fans, calling the match to order.

The teams lined up at centerfield for player introductions, starting with the home team, USA, in white was the tenacious Roger Souto at #1, with Newport Polo Founder & President Dan Keating at #2, and surgically precise Dr. Dave Bullis at #3, while fan-favorite Rory Torrey filled #4.  In light blue for Argentina, the Buenos Aires hotshot, Estanito Puch was at #1, with Jorge 'Malevo' Ramos at #2, Kevin Horan at #3, and Team USA defector to represent his home country, Oskar Monzon at #4. Both nations' anthems rang out around the field before TD Bank's Charles Lomnitzer officiated the Coin Toss to determine starting directions.

Umpires Charlie Bullis and Jonathan Kaye ushered the teams into the starting lineup, then bowled the ball into play.  The initial power play yielded no advantage to either side through the first few minutes.  Missed goals on penalty hits by both sides ensued before Torrey finally broke the stalemate with the first goal of the match for USA, followed by a second with less than a minute in the first chukker.  Chukker two saw the winds shift in favor of Argentina, though it took a herculean struggle.  Horan put up the first challenger goal as the clock approached the two-minute mark while Monzon tied it up, 2-all, with seconds to spare.  An Argentine foul on a USA run to goal awarded a free hit from the 60-yard-line early in chukker three, converted by Torrey to regain the lead.  A minute later, Monzon tied again, putting the teams on equal footing as the bell signaled half-time.

September showers earlier in the week softened the field, prompting an all-out divot stomp effort to smooth it again for the second half.  The Cocktail Guru's Rojo Punch, featuring the classic Argentine combo of Malbec and cola was the sip and stomp libation of choice from the Pavilion Patio Bar.  The aroma of tantalizing delicacies wafting from the nearby mobile gourmets drew in the hungry masses, while those eager for a bit of a shopping spree strolled the Vendor Village.

Argentina retook the field, ready for an all-out charge toward dominance. USA gave the opening in the form of a penalty hit from the 60-yard-line, converted by Monzon, followed by a goal in regulation play.  Goals by Souto, then Keating tied the match again, but it was overturned by Puch and Monzon for an Argentine lead, 7 - 5.  Between chukkers, Stella Artois Best in Show judges awarded the pharaoh's prize to a great pyramid erected in the tailgates in honor of the originally scheduled Egyptian team.  Argentina kept taking shots at the cracks in USA's ramparts when another penalty conversion by Monzon was followed by a goal in regulation play to widen the fifth chukker lead 9-5.  USA's defenses crumbled like the Alamo in the final chukker.  A barrage by Monzon added three more goals for Argentina.  Bullis managed a final shot for USA.  Horan then Puch led the last charge to take the perpetual cup 14 - 6.

Following the fan salute lap around the field perimeter, players and fans reconvened in front of the Pavilion Patio for the Veuve Clicquot Trophy Presentation and Champagne Toast.  BD's Kate Bracken-Bellew awarded the 1992 USA vs. Argentina perpetual cup and Providence Diamond player trophies to the victorious Team Argentina.  After raising a glass to camaraderie and sportsmanship on and off the field, the players dispersed among the crowd for the autograph signing and cocktail hour.  Signature complimentary libations by The Cocktail Guru in the Modern Luxury Lounge capped off the festivities.