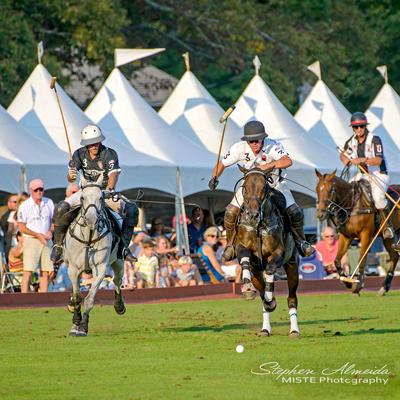 The heat was on this past Saturday evening as the Bentley vs Rolls Royce ProAm took place at the Newport International Polo Series, presented by Turkish Airlines.  The annual ProAm match between these two competitors proved to be one of the fastest and most exhilarating games to date this season, with a number of the top players in the area returning to the field. Spectators assembled stunning racing-themed tailgates, reved up for the chance to win the Stella Artois Best in Show Contest.  Bentley Boston and Rolls-Royce Motor Cars New England arrived in style, showing off some of the most exciting new models in our vendor village, including the Rolls-Royce Cullian, Rolls-Royce Ghost Sedan and Bentley Continental GT Convertible. The stage was set perfectly for the battle that was about to ensue.

Game commentator William Crisp called the players and officials to the field for the coin toss. Team Rolls-Royce was introduced, beginning with our favorite player-in-pink, Minnie Keating, at position #1. Standing strong at #2 was Oskar Monzon, followed by longtime Newport player Rory Torrey, and anchoring the team in the #4 postition was our president and founder, Dan Keating. Team Bentley took the field with a fierce line-up, beginning with Keith Hart in the #1 position, followed by up-and-comer Ari Dogani at #2. The force that is Federico Wulff filled the #3 position and the impressive Esteban Scott rounded out the team at #4. All players were mounted with extraordinary ponies, eager to compete.

The game was close, right from the first throw-in, as a sleek goal from Bentley within the first 30 seconds was answered quickly by Rolls-Royce. The first chukker went point-for-point, while the second expired without a single goal from either team, proving that these players and ponies were, indeed, perfectly matched competitors. Spectators cheered from the sidelines while sipping classic Pimm's Cups, the featured beverage of the day. In the third chukker, Bentley pulled ahead, leading 4-1 and leaving Rolls-Royce with a need for halftime strategizing.

Fans flooded the field at halftime for the divot stomp and a bubbly flute of Veuve Cliquot on a balmy September evening. The Patio Bar was buzzing with excitement; patrons flooded the Newport Polo Pro Shop, eager to check out the colorful variety of new merchandise. Vendor Village hosted a spectacular display of Rolls-Royce and Bentley automobiles where fans took photos and admired the style and craftsmenship of the exotic vehicles.

In the game's second half, Rolls-Royce roared back with a vengence with Monzon and Torrey both scoring goals in the fourth chukker to bring the game back to an even score. Early in the fifth chukker, Bentley slid back into the lead when Wulff successfully scored a penalty shot. But Rolls-Royce wasn't going down without a fight! Monzon managed to tie the game up yet again, leaving spectators on pins and needles for the start of the sixth chukker. So much can happen in seven minutes and thirty seconds, and the last chukker proved an electrifying example. While the two battled hard for the win, ultimately Bentley pulled ahead with Wulff scoring a penalty shot as well as a goal from the field.

The thrill of the crowd was palpable as the eight players cantered through the victory lap sharing high-fives and smiles as they greeted their enthusiastic fans. Just in tow behind the players and ponies was the line of magnificent vehicles in every color and model one could imagine. Rolls-Royce and Bentley displayed thier finest vehicles, cruising the perimeter of the field for all to see. Following the lap was the Veuve Clicquot Champagne Toast and Trophy Presentation where Christine Scott, marketing director of Rolls-Royce Motor Cars New England and Bentley Boston presented the ProAm cup and trophies from Providence Diamond. Fans enjoyed complimentary Goslings Dark 'n Stormies, toasting the players in the Modern Luxury Lounge to top off a thrilling evening.