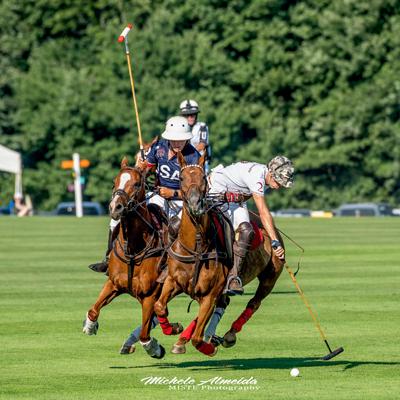 Brilliant summer weather broke through a cloudy week for an exciting international series matchup, USA vs. Italy, on Saturday July 23rd, part of the Newport International Polo Series, presented by Turkish Airlines. Team Italy, a regular of the international series and fan favorite, arrived in Newport with a rockstar roster ready to battle Team USA and regain their winning streak. Their roster boasted two well seasoned veterans and two next generations hotshots, all ready for a thrilling 6-chukker match. Spectators from all around New England were thrilled for the return of the Italians and arrived at the International Polo Grounds dressed in their best Italian inspired attire sporting their Italian-style picnics to celebrate.

At 5PM the game started promptly, beginning with an opening ceremony and a few words from Team Italy's captain, Marco Elser. The pre-match coin toss was led by Christine Scott, Marketing Director at Bentley Boston. Following the coin toss, announcer William Crisp introduced the two teams. In blue was Team USA with speed demon Roger Souto at #1, veteran Dan Keating at #2, team captain Rory Torrey at #3, and defender George Hempt at #4. In white was Team Italy with veteran Marco Elser at #1, hotshot Peter Elser at #2, pro Pedro Llorente at #3, and Henry Elser at #4 to anchor the Italians. After the introductions came the Italian national anthem and Star Spangled Banner.

The match began with an early advance from Team USA on the offense towards goal. Two minutes in, Torrey scored an incredible goal on Kathy Got Even to boost Team USA into an early lead. Team Italy pushed back and less than two minutes later Llorente scored two goals in quick succession just before the end of the first chukker. Team USA dominated the second chukker with an unbelievable run from Torrey as he scored 4 goals on Alesha to boost Team USA to a lead of 5-2 over Italy. In the third chukker Keating scored an early goal with Llorente scoring another to fight back leaving the score 6-3 at half time with Team USA in a clear lead.

Half time arrived quickly after the first three chukkers which signaled the half time divot stomp to "reset" the field for the second half of the match. The Vendor Village bustled and the Pro Shop was packed with action as spectators turned in their raffle tickets in hopes of winning the Daily Door Prize, a gift from Veuve Clicquot, and for a chance to win the Turkish Airlines Grand Prize, two business class tickets to anywhere in the world on Turkish Airlines. During halftime the judges circled around the field to determine the best Italian tailgate spread or picnic to to award the Stella Artois Best in the Show Contest prize, a vintage lawn chair and 12-pack from Stella Artois.

In the fourth chukker the score gap tightened as Llorente scored two goals for Team Italy. Torrey ended the chukker with another goal to bring the score to 7-5 with the Americans still in the lead. After the chukker William announced the winner of the Stella Artois Best in Show Contest, a brilliant Italian  tailgate spread and winner of the prize from Stella Artois. Team USA came out strong in the fifth chukker with a goal from Hempt, his first of the game. Llorente then scored his sixth goal off of a penalty followed by one from Peter Elser, his first of the match. The sixth chukker was a thrilling one as Team Italy aimed to tie the game with Team USA but Torrey solidified their fate with his final goal to bring Team USA to victory with a final score of 9-7.

Directly after the match Team USA and Team Italy made a lap around the field in the Newport Victory Salute, a beloved post-game tradition. Afterwards was the Veuve Clicquot Trophy Presentation where Christine Scott of Bentley Boston presented the USA vs Italy Perpetual Cup and the Providence Diamond player's trophies. Pedro Llorente of Team Italy was named MVP of the match and Tarzan, loaned to Team Italy by Dan Keating, was named Best Playing Pony. After the celebration and autograph signing, the players and spectators enjoyed Italian style neapolitan pizzas from Amano Pizza + Gelato and cocktails from Goslings in the Modern Luxury Lounge.