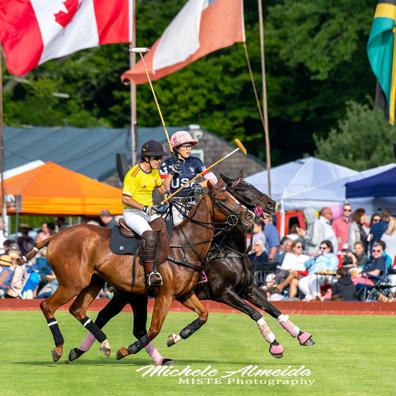 Excitment was at a record high as Opening Day of the Newport International Polo Series, presented by Turkish Airlines, unfolded on Saturday, June 4th at Glen Farm featuring the USA vs Colombia. Saturday's match was the Colombian debut in Newport and spectators from all over New England came to view the head-to-head duel between the respective countries. Although chilly and breezy, the weather was ideal for a tough 6 chukker match between the North and South American rivals. Early to arrive and enjoy the day, spectators were lively and excited, ready to cheer on their teams in their best Colombian inspired attire.

Spectators sprawled field-side enjoying the their Colombian inspired lawn picnics and tailgates prepping for the opening competition of the series. The Pro Shop was filled new merchandise ready for the summer season ahead as people flocked to the shop before the game to pick up gear to represent Newport Polo. Field-side were the Gourmet Food Trucks that offered every delectable food one can think of from donuts to chowder and were buzzing with action until well after the match. In the Vendor Village was Cocoa and Co. Photography offering up custom portraits and the Patio Bar where delicious artisan cocktails were being served by the Cocktail Guru with other alcoholic beverages from Stella Artois, Santa Margherita Wines, and Veuve Clicquot.

After an afternoon of food, wine, and company, the main event of the night began at 5PM starting with a special flag raising for the flag of Colombia by Rhode Island Senator Sandra Cano, Chair of the Senate Committee on Education, and Senator Jonathon Acosta, both Colombian Americans. Umpires Patrick Quigley and Chris Fragomeni then led Team USA and Team Colombia onto the pitch where the coin toss was completed by Christine Scott, the marketing director at Bentley Boston, part of Herb Chambers Exotics to officially kick-off Opening Day of the Newport International Polo Series. Spectator favorite, commentator William Crisp, welcomed both teams to the pitch with a special welcome to the Colombian team who traveled long and far for this important match. Wearing navy for USA, Roger Souto took the #1 position, with Dan Keating at #2, Minnie Keating at #3, and Sam Clemens at #4. Team Colombia was in bright yellow for the match with Emilia Forero taking the #1 position, Leopoldo Forero and Felipe Rojas at #2, Polito Forero at #3, and Jaime Bermudez at #4. Following the National Anthem of the Republic of Colombia and the Star Spangled Banner, the players took their sides and the match began.

The match started with back and forth play between Team USA and Team Colombia as both teams struggled to make definitive and lasting moves in the first chukker. With a nice move, Minnie Keating was able to pull away with a clean shot into the goal scoring the first point of the USA vs. Colombia match. Moving into the second chukker the Colombian team did not back down and Leopoldo scored a goal for the Colombians tying up the game. Before the end of the second chukker, Souto was able to execute a nice drive propelling the USA to a 1 point lead over Colombia (2-1). The third chukker was one of the best chukkers of play for the Colombian team as Rojas scored a clean goal and not long after, Polito scored his first of the match bringing the score to 3-2 in the Colombians favor at the end of the first half of the match.

Half-time was a abuzz at Glen Farm as attendees visited the Pro Shop to purchase new merchandise to stave off the chilly weather on debut day. The Patio Bar refilled thirsty spectators cups to enjoy during the polo match and the range of Gourmet Food Trucks were heartily enjoyed by field-side spectators. The Veuve Clicquot Door Prize had spectators buzzing to submit their raffle entries before the winner was chosen at the end of the 5th chukker. Photographers circled 'round the field to determine the winners of the Stella Artois Best in Show Contest with opening day being a Colombian theme.

The second half of the match began with several penalities including a Colombian foul that resulted in a clean goal for Souto pushing Team USA farther into the lead they developed in ther first half of the match. Colombian superstar Emilia Forero countered with a strong goal battling back against Team USA. Another penalty came against Team Colombia which resulted in the first goal of the match for Clemens leaving the score at 4-all, a thrilling place to be for both teams with two chukkers left in the match. Emilia Forero opened up the 5th chukker with a goal followed by a goal from Souto to bring the score back to a stalemate at 5-all. The 6th chukker and the moment of truth arrived with Dan Keating executing a brilliant shot marking his first goal of the match quickly countered by Bermudez with his first goal of the match. As the clock ticked down, Clemens scored another goal for Team USA followed shortly from a goal by Bermudez to tie the game. In an exciting last few minutes the lady of the hour Emilia Forero scored the winning goal for Colombia to bring the final score to 8-7 in Colombia's favor.

The exciting match was followed by a victory lap by Team Colombia around the field in a traditional victory salute as announcer William Crisp congratulated the team. After the victory lap, players from both the teams arrived at center field for the trophy presentation. Christine Scott of Bentley Boston presented the Colombian victors with the newly minted Liberty Bowl trophy handcrafted by Paul Revere in the trophy presentation, hosted by Veuve Clicquot Champagne. The award for Best Playing Pony was awarded to Asai for his agile and skillful play in the match. The MVP player of the match was decided by the crowd to be Minnie Keating from Team USA. As the match came to a close, spectators and players enjoyed an apres polo Los Andes Sampler and a toast in the Modern Luxury Lounge.

Live audiences can enjoy the Newport International Polo Series polo matches every Saturday as they have for 31 years to witness the timeless sport unfold on the manicured, emerald green at Glen Farm, home of the Polo Series, in a classic exhibition of horsemanship and valor, with host, the Newport Polo Club, where the home team - Newport/USA - meets challengers each season from around the world as well as teams representing major US cities and regional rivals in one of Newport's unique traditions & renowned attractions.

The Polo Series is scheduled to continue every Saturday through September. The schedule of teams is subject to change without notice, as per RI State mandates and US travel bans which may impact travel and Adult Sports.  Stay current with the 2022 team lineup & stats, latest news, events, and more by e-scription to the Gameday Briefing (sign up) and weekly eMagazine (sign up). Both subscriptions are private and spam-free.

Gilded Age Legacy.  Polo is, without a doubt, the oldest ball game in the world today. First recorded in the 6th-century b.c. when the Turkomans beat the Persians in a diplomatic tournament, the alluring game caught on with equestrian royalty and cavalry, and took off with globalization, withstanding the tests of time. Arriving on Newport’s shores during the Gilded Age, the sport had evolved for nearly 2500 years, steeped in tradition, captivating newcomers like Newport's summer sporting set who embraced the new pastime, establishing America's first polo club in 1876.  A charter member of the United States Polo Association, the club today is still a trailblazing model polo club, hosting the Newport International Polo Series public exhibition matches, supporting philanthropic causes, organizing tournaments, polo club member services, and polo instruction year-round. Experience the king of games in its American landing at Newport Polo.