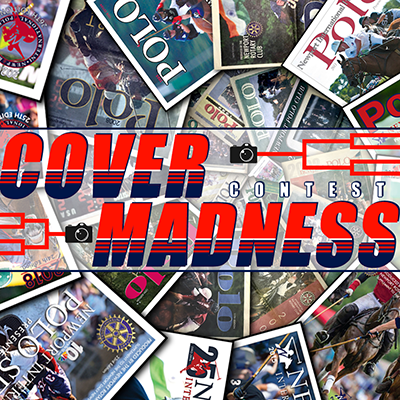 Calling all polo fans, Newport Polo has a full-blown case of Cover Madness and we need your help to cure it!

The field of our top-ranked picks from the thousands of photos taken by our official photographers are in the running to reach All-Star status as the 2022 Newport International Polo Series season program cover champion.  Cast your vote below, before Noon on March 26th, to narrow down the Final Four that our panel of expert judges will evaluate to choose one winner.

You could shoot nothing but net with an MVP Day at Polo if one of your selections is named the winner.  Grand Prize is described & illustrated below the form.

Complete the form below to enter.

The Grand Prize Winner will receive:

MVP Day at Polo - One grand prize winner will receive a Gift Certificate for a reserved table in the centerfield Pavilion to seat 6, redeemable online for the match of the winner's choice, a bottle of champagne to enjoy at the match, and a $200 Gift Certidicate to spend in the Pro Shop!  Total prize value = $460.00.

Newport Polo's annual Season Program is produced in partnership with the Rotary Club of Newport and Newport this Week.  The alliance between Newport Polo and the Rotary Club of Newport was forged in 1991 by Newport Polo Founder Dan Keating, and Rotary President Emeritus CMDR J.B. Leavitt.  Leavitt attended the 1991 celebrity match, organized by Keating as s precursor to the Newport International Polo Series, and immediately saw the potential for a fresh opportunity to create a community event to fund the Rotary Club's charitable initiatives.  Keating wholeheartedly agreed as plans began in earnest to host the first Rotary Benefit Match that fall.  Fundraising efforts were furthered in 1995 as the Rotary Club took over production of the official Newport International Polo Series season program, securing all ad sales and retaining 100% of the revenue to support its charitable initiatives.  Fundraising through the benefit match and season program ad sales has endured to the present day.  Annual totals reach tens of thousands of dollars to provide lasting benefit to Newport County and beyond by funding college scholarships for local students, and other significant charitable initiatives to endow the needs of the community.

Read more about the history of Rotary and Polo in our special Time Machine feature, published as part of Newport Polo's 30th-anniversary celebrations in 2021.  Current season program production is underway with reservations for ad space due by April 15, providing local businesses and organizations unparalleled exposure for their advertising dollar due to the long duration and wide distribution of the publication.