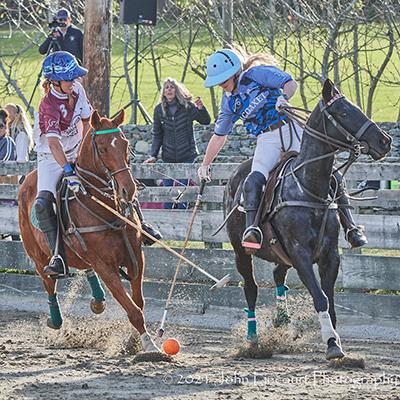 Four evenly matched teams of the top-rated women in the northeast took up the challenge to make their mark in US Polo History, competing for the perpetual cup and $2,500 in prize money in the 3rd annual USPA Northeast Circuit Arena Women's Challenge on November 13 and 14, 2021 at Newport Polo.  Sponsored by the USPA tournament stimulus, awards, prize money, and professional umpiring were all provided by polo's governing body in the U.S.  Players and ponies were well-tuned at the height of a robust arena polo season happening across the country.  Fast plays were expected as all four teams included players who have represented Newport/USA or their home cities in the Newport International Polo Series, providing exciting viewing for players' friends and family, and Newport Polo Club members, all to high-scoring results.

Semi-Final 1 brought The Avery to square off with Farmington Polo for a chance at the first berth in the Championship round.  Farmington held a slight handicap advantage, awarding The Avery 1 automatic goal at the start to level the field.  Farmington burst out of the starting gate, scoring two goals in quick succession.  Meanwhile, The Avery lit its afterburners, landing two goals of its own.  A last-ditch effort by Farmington to stop another Avery attack resulted in a penalty 1, automatic goal, as in the umpire's judgement, The Avery would have scored if the foul wasn't committed.  Farmington was undeterred, scoring its third goal of chukker 1, but The Avery kept up the pressure to score again, leading 5 - 3.  The high-stakes horserace continued in Chukker 2.  Farmington racked up two more points thanks to its players efforts, plus a third from a helpful pony who kicked the ball in.  Still, The Avery added four goals to its side of the scoreboard, leading 9 - 6.  A brief half-time to smooth the arena playing surface provided the teams a chance to regroup.  Chukker 3 saw the momentum shift in Farmington's favor thanks to three goals scored to The Avery's one, tieing at 10-all.  The lure of glory and prize money spurred the final charge to the end of chukker 4.  Teamwork by The Avery to outmaneuver Farmington at the arena's walls paid off with more time in control of the ball.  Farmington's efforts won a penalty conversion from the 25-yard-line, but it wasn't enough to match The Avery's four goals in regulation play, cementing its win, 14 - 11.

Teams Acoaxet and Spark Polo saddled up for Semi-Final 2.  Equal team handicaps awarded no points to start for either side.  Acoaxet was first to the goal for a strong opening gambit.  Spark Polo then skillfully positioned its players to turn the hat trick, leading 3 - 1.  Spark Polo's momentum carried to chukker 2, scoring another three successive goals.  Acoaxet briefly interrupted with a goal of its own, only for Spark Polo to claim the next.  Acoaxet changed tactics, to score two more before half-time, still trailing 4 - 7.  Acoaxet checked Spark Polo's advance in chukker 3.  Equilibrium from the previous chukker persisted though as each side added one more goal to its totals for a Spark Polo lead, 8 - 5.  Spurred by the three-goal deficit, Acoaxet grabbed the bull by the horns, scoring the first goal of the final chukker.  Spark Polo retaliated, but then Acoxet turned the hat-trick to tie the match at 9-all.  Minutes still remained for either side to tip the balance in its favor.  Spark Polo kept up its strong, steady plays, scoring once to take back the lead, then again for good measure to lock in its Championship berth, 11 - 9.

Sunday competition began with the Consolation as the two Semi-Final runners up vied for the bronze finish.  Farmington again landed the first goal of the match, but a penalty hit awarded to Acoaxet from the 15-yard-line was the perfect equalizer.  Farmington scored another, while Acoaxet turned up duces.  Then a penalty hit converted by Farmington, followed by a goal in regulation play gave it the slight advantage, 4 - 3.  Acoaxet increased the pressure in chukker 2, shutting down Farmington's advances on goal, while scoring two of its own.  Still, Farmington equalized before the final bell for a 5-all tie at half-time.  Excitement and tension grew in chukker 3 as Farmington took the lead twice, only to have Acoaxet match, maintaining the tie at 9-all heading into the final chukker.  This time, Acoaxet led the way, taking a two-goal lead early in the chukker.  Farmington equalized again as the seconds ticked down to the final bell.  Acoaxet dug deep to score the winning goal and a 12 - 11 bronze finish.

Now came time for the 'big money polo game '21' with Semi-Final winners The Avery and Spark Polo competing for the winner's purse of $1,500 and runner's up purse of $1,000.  Handicap differences awarded The Avery one goal to start.  Unfortunately, it proved The Avery's only goal of chukker 1.  Spark Polo operated with surgical precision, striking goal after goal for a 4 - 1 lead.  Momentum turned toward The Avery in chukker two, landing the first goal thanks to a cunning play and a second to a helpful pony that kicked it in.  Spark Polo retaliated, scoring a two-pointer from outside the 25-yard-line, followed by another single-pointer.  The Avery players kept their wits and linked up their third goal.  Spark Polo regained control before the half with another goal and 8 - 4 lead.  Action intensified in the penultimate chukker as a total of 10 goals were scored in the period.  Both teams unleashed power plays to score two-pointers and matched another three regular goals each, Spark Polo still leading, 13 - 9.  Spark Polo controlled the start of the final chukker, raising its score to 14.  The Avery pushed hard to win each remaining play, drawing two penalty hits neatly converted and a goal in regulation play.  While the gap had narrowed, Spark Polo still claimed the top podium finish, 14 - 12.

Newport Polo Club Manager Dave Markell presided over the trophy presentation where Best Playing Pony, Frijole, trained and owned by Minnie Keating, received first honors.  Then, up-and-coming high school player Addie Politi was awarded MVP.  Both honors were determined by a vote of the Acoaxet and Farmington team captains who observed the Championship match from the sidelines to reach a decision.  Next the silver finishing team The Avery was presented with a giant check for the $1,000 prize award to the second-place team.  Finally, the perpetual cup and $1,500 prize check were presented to Spark Polo.  To close the tournament, thanks were given to the United States Polo Association, professional umpire Juan Carlos Gonzalez, umpire assistants Phil Gonzalez and Annie Kirby, goal judges Amy Garrison, Jaír Zentno, and Gus Reed, timekeepers Melissa Bessette, Isabelle Bessette, and Stephanie Coyne, photographers John Lincourt and Scott Trauth, and videographer Zach Bessette.