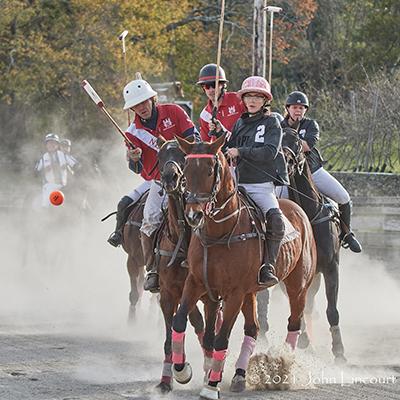 Titans of the arena clashed on November 6 & 7, 2021 for a chance to claim the perpetual cup in the USPA Northeast Circuit Arena Sportsmanship Cup, hosted by Newport Polo.  Four teams found ideal late autumn conditions, clear and dry, for an optimal playing field with $2,500 in prize money provided by the USPA and the chance to make a permanent mark in the US Polo annuls.  Competition commenced on Saturday with two semi-final rounds and opponents determined by random draw vying for a berth in the Sunday Championship.

Kinsella Building Co and NPT W2P were first to the arena for Semi-Final 1.  Kinsella Building started with two points on the board to make up for the difference in team handicaps.  W2P quickly made up the two points, and then some, surging into the lead 6 - 2.  After an initial goal in chukker 2, W2P was checked while Kinsella Building landed its first two goals in regulation play.  W2P scored again, but Kinsella Building threw down duces to close the gap, 6 - 8 for W2P.  W2P played the advantage again to start chukker 3 until Kinsella Building disrupted the advance with its own goal.  W2P struck back, then Kinsella Building racked up a 2-pointer, scored from outside the 25-yard-line. Still, W2P nabbed two more goals to lead 12 - 9.  Kinsella Building kept up its stamina in the final chukker, matching a goal by W2P on its own penalty conversion.  Unfortunately, it proved Kinsella Building's only goal of the chukker while W2P added two more, ending 15 - 10 to take its place in the Championship.

Next to the arena, Polombia faced Newport for a chance at the second berth in the Championship.  Both teams were equal in handicap, awarding no points to either at the start.  Polombia came out swinging to score the first goal of Semi-Final 2.  Newport quickly got off the ropes, landing four regular goals and a 2-pointer to lead 6 - 1.  Chukker 2 had Polombia on the ropes, never able to link up a play to the goal, while Newport doubled its score to lead 12 - 1.  Finally, a 2-pointer and penalty conversion got Polombia back in the game, but Newport continued to pull ahead, adding three more goals to lead 15 - 4.  Polombia needed to hit long and accurate for a chance to regain lost ground in the final chukker.  Two more goals on the board couldn't match another four from Newport to win 19 - 6.

With prize money and a permanent etching in the annuls of US Polo history, NPT W2P and Newport saddled up for the Championship round to end the tournament.  W2P started strong with the first goal in chukker 1.  Then, Newport took off, scoring four goals in regulation play and a penalty conversion, while W2P managed one more goal to end the chukker trailing 2 - 5.  W2P continued a steady game, making its own penalty conversion and a goal in regulation play.  Newport's progress was checked, but still managed two regulation goals and a penalty conversion to lead chukker 2, 8 - 4.  Neither team slackened their pace after half-time.  Newport added three more goals to its total while W2P turned two more, keeping Newport in the lead 11 - 6.  The final do-or-die chukker saw Newport put the pedal to the metal, adding five more goals to W2P's one, cementing itself as the winner, 16 - 7.

All the teams reconvened outside the arena for the trophy presentation where $1,000 in prize money was awarded to the runners-up, NPT W2P.  Newport received $1,500 as the first-place team and hoisted the perpetual cup high to celebrate their win.  Ula Green on team Newport was selected as the MVP and Tallulah owned by Minnie Keating was named Best Playing Pony by a vote of the team captains from Polombia and Kinsella Building.  Special thanks were offered to the United States Polo Association as the tournament sponsor, providing prize money, player trophies, and the services of professional umpire Juan Carlos Gonzales, along with goal judges Amy Garrison and Gus Reed, timekeepers Melissa Bessette and Mary Roda, videographer Zach Bessette, and photographer John Lincourt.