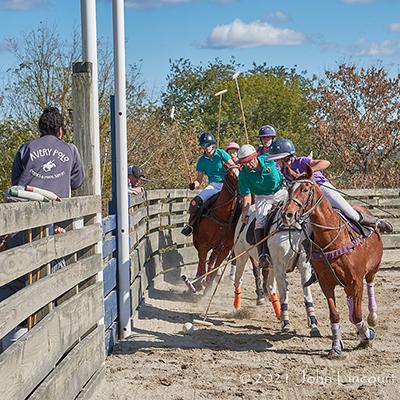 Newport's autumn arena competition season commenced with a heated battle between five teams vying for the annual Player's Cup on October 16 & 17, 2021.  Seasoned players along with Rookie of the Year contenders formed their legions, while random draw designated opponents for the semi-final rounds.  Unseasonably warm temperatures and clear, bluebird skies set the stage for an exciting contest at Newport Polo's private outdoor arena.

Polombia faced Savage in the four-chukker Semi-Final 1 to earn the first berth in the Sunday Championship.  The teams were evenly matched at the high-scoring start with each side accumulating 7 goals apiece by half-time.  Strong plays for goal conversions continued through chukker 3 until Savage let loose to take a 4 goal lead.  Scores climbed to rare heights as the epic duel neared its conclusion.  Polombia racked up 14 points by the conclusion, but the Savage onslaught earned the team 19 goals and a place in the Championship.

Runners-up from Semi Final Games 1 & 2, Polombia, Galloping Grooms, and Chukka Khan returned for a six chukker round-robin consolation match on day two to capture a podium finish.  Polombia was first up to face the Galloping Grooms in round one.  The Grooms had difficulty taming their rivals, while Polombia surged ahead to win 5 - 1.  Next, Chukka Khan tangled with Galloping Grooms where the Khans bested the Grooms, 5 - 4 but one goal awarded to the Grooms for the handicap difference resulted in a tied round at 5-all.  The fiery finale brought back round-one winner Polombia against Chukka Khan for the bronze.  Four-goals apiece in the first chukker made an admirable start.  Then, Chukka Khan lost its magic and Polombia pulled ahead to cement its 3rd place overall finish.

Final glory came down to the Championship contest between Semi-Final 1 winner Savage and Semi-Final 2 Winner The Avery. Savage lived up to the name with relentless attacks that opened up a 3 point lead.  The Avery managed to tame the beast, getting two goals to trail by a point, 3 - 2.  Savage's brutish charge continued in chukker 2 with another three goal rally, only briefly stayed by a single score for The Avery.  Then, the monster was really unleashed in chukker 3 when Savage accumulated 7 more goals while The Avery languished.  The Avery finally tamed Savage by outscoring them in the last chukker, but it came far too late.  Savage took the top podium position, 15 - 7.

Players convened arena-side for prize giving where the perpetual silver loving cup trophy was awarded to Savage for making a clean sweep of the competition, along with individual player cups brimming with champagne.