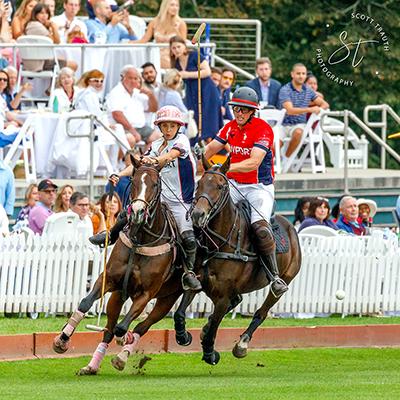 A binary battle drew a sizeable and enthusiastic spectator audience whose spirits couldn't be dampened by the overcast day to watch the final match of the Newport International Polo Series 30th Anniversary season, Presented by Turkish Airlines.  Newport Men made their fifth challenge against Newport Women for the Turkish Airlines Finals in a hometeam rivalry that has become an annual favorite played near the close of each season.  It was all on the line for the Newport Women, defending their first victory over Newport Men, won in the last match of the 2020 season.

Spectators were feeling the shift to autumn as decor trended toward staple adornments from pumpkins to mums, foliage patterns, and even some Halloween whimsy.  Wood-fired pizza, seafood chowder and lobster rolls, gourmet saugy dogs, and homemade ice cream all tempted match goers from their seats, while premium libations at the Davitt Pavilion Patio Bar rounded out the hospitality of the day.  Players were happy to welcome the curious onlookers passing through the paddocks as they prepared to do battle.

Warmups began in the countdown to 4PM before umpires Dan Keating and Sam Clemens ushered the players to centerfield for introductions.  In red for the Newport Men, Jed Pearsall held the #1 forward position, with Chis Fragomeni as the midfield #2 player, Sam Shore quarterbacking from the captain's #3, and Peter Friedman the defensive #4.  Wearing suffragette white, the Newport Women roster included rising high-school stars Teghan Torrey at #1 and Catie Reed at #2, with Polo Series favorite Minnie Keating at #3, and reliable veteran Megan Schulz at #4.  Color commentator William Crisp called everyone to attention for the national anthem, giving way to Bruce Spitzer of Newport Jaguar Tours to officiate the coin toss.

Equalized by horses and handicaps, polo is among the few team sports where men and women compete equally on the field.  Both sides played heavy defense from the first throw-in, vigorously defending the goals.  A zealous charge by Shore for the Newport Men finally broke the stalemate, with the only goal in the final two minutes of the first chukker.  Chukker two brought more of the same with neither side gaining a clear advantage.  Finally, Friedman added another point for Newport Men, matched moments later by Torrey to get Newport Women on the board.  Friedman padded the Men's lead though, 3-1 at the end of chukker 2.  Newport Women made a costly mistake at the start of chukker 3, handing a penalty conversion to Shore less than 30 seconds into the period.  Newport Men returned the favor though, giving Keating the window to her team's second goal.  Fragomeni padded the Men's lead with less than 15 seconds until the half, 5-2.

Half-time divot stomp proceeded apace, but the real rush was to the Pro Shop for the last chance to enter before the Turkish Airlines Grand Prize was awarded during the trophy presentation, and not to be missed new arrivals of top-shelf athleisure for fall.  All followed by a last stroll through the curated boutiques in the Vendor Village, including souvenir portraits and handmade equestrian jewelry.  Meanwhile, our Stella Artois Best in Show judge combed the field for the most festive party of the day to award the coveted jumbotron moment of fame and Stella Artois Picnic Umbrella.  Both teams put the interval to productive use, strategizing on how to claim the silver prize.

Shore blitzed the start of chukker 4 for Newport Men to score out of the first throw-in.  Newport Women rallied their defense, but couldn't connect with the goal.  Then, Friedman started a volley for the Men, joined by Pearsall and Shore to open a wide gulf, 9-2.  Reed sparked a glimmer of hope for the Women, to score in the final 30 seconds of the chukker.  Another early goal won by Friedman for the Men painted a bleak picture for the Women's recovery.  Then, Reed broke the Men's momentum, with a goal during regulation play.  An infraction by the Men gave Keating a penalty hit, expertly converted, before Reed and Torrey tag-teamed two more goals in regulation play to close the deficit, 10-7.  Newport Women were in within a shout, only needing three goals to send the match into overtime.  But, chukker 6 was an uphill fight, and the Women struggled to gain ground.  Finally, Friedman pushed it over the edge for a resounding victory by the Newport Men, 11-7.

Spectators ran to the field perimeter to give the players a hearty final sendoff in the last victory lap and fan salute of the season.  The teams reconvened in the player's corner where the Veuve Clicquot Trophy Presentation float was waiting to chauffeur them back to centerfield for the prize giving.  Representatives of Turkish Airlines and Shultz Marketing Partnerships ascended the stairs with congratulations for all but awarding the perpetual cup to the victorious Newport Men.  Then, the moment of suspense arrived as the treasure trunk of all the entries for the Turkish Airlines Grand Prize was delivered to the stage.  A thorough mixing and single draw awarded the round-trip business class airfare for 4 to any destination in the world to a gentleman from Narragansett, RI. Players posed for photos before stepping into the crowd for the much-anticipated autograph signing, followed by a cocktail hour at the patio bar to toast the 30th Anniversary.