A Binary Argument: Newport Polo’s Battle of the Sexes 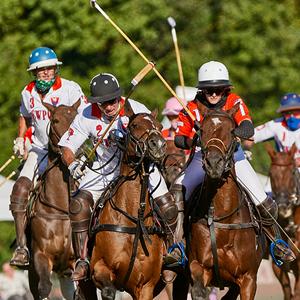 The finale in Newport International Polo Series' 30th anniversary season on Saturday, September 25th at 4 PM, brings to a head a rivalry for the ages, in a Battle of the Sexes, in the Turkish Airlines Finals.

“Everyone has an opinion in this argument, and Polo delivers the forum, as the only contact sport where men and women get to compete with and against each other,” Newport Polo Series Founder Dan Keating informs. “To highlight how competitive these players are, toe to toe on equal footing, we are hosting a battle of the sexes with an all-female squad pitched against an all-male squad. Audiences get to see first hand just why Polo players, regardless of sex, can compete equally.”

Indeed, it is the last match of the season, as the turf becomes dormant, making each player more eager than ever to earn a spot on the final roster. Fan favorites will face off for their last shot at victory, having geared up for this moment all season. Men lead 3 to 1 against the Women, but the past year has turned many expectations on end, so there is no telling what could happen come game-time.

Culminating at this final match, the season’s Grand Prize Drawing, courtesy of Turkish Airlines, will be awarded. This fabulous prize entails round-trip airfare in business class for four to any Turkish Airlines destination in the world. All eligible entries collected during the season will be included for one big, suspenseful drawing during the trophy presentation post-match. Winner will be contacted via email with all the details of their prize. This amazing drawing will be the great send off to Newport International Polo’s 30th anniversary and to a wonderful summer.

This Saturday also includes a final display of a priceless work of art, “PARADISUM” by Raphael Macek in the Pro Shop. The limited edition, large format, photographic print of a silver-white horse is printed on archival paper in a patented Diasec face-mounting process onto acrylic glass, signed and numbered, with certificate of authenticity. Because of the different light penetration and refraction of acrylic glass compared to normal glass, the colors are more brilliant, and the image is sharper than when using a regular picture frame. The result is a high gloss finish, resistant to ultraviolet light. Macek’s celebrated works have been featured globally at over 30 art expos from Paris Photo to Art Basel in Miami and have been showcased in over 25 solo exhibitions around the world including Dubai, Berlin, Brussels, France, Spain, Brazil, London, Munich, Miami, New York, and Los Angeles. Proceeds from this special auction go to the Jeffrey Osborne Foundation, with whom Newport Polo is proud to support. More information on this incredible piece is available on our website under the Events tab, and to bid email Agnes Keating at agnes@nptpolo.com. Bids are in increments of $500 and the piece currently sits at $3,600.

Lawn tickets are available online and at the gates. Standby Seating at 4pm Gametime includes Tailgates & Chalets offered at the Main Gate, and Pavilion upgrades at the Hostess Stand after the first chukker, with an admission purchase for Lawn seating.

The International Polo Grounds are located on the acreage of Glen Farm, 250 Linden Lane (off Route 138) in Portsmouth, RI, only minutes from Newport’s bustling harbor.  This bucolic setting on Aquidneck Island is easily accessible from the main thoroughfare, Route 138, for a picturesque landscape and pleasurable afternoon of polo spectating throughout the summer.  The property is the last 100 acres of a pre-colonial settlement from the 1600’s that became the Town of Portsmouth's original gentlemen's farm, an 800-acre manorial estate established during a Gilded Age movement of retreat from the high life into pastoral country acres.

Its classical 19th century stone barns and its park-like grounds were rehabilitated by Polo Series founder, Dan Keating in the early ‘90’s and continue to thrive as an equestrian & community recreational property, and home of the Polo Series. Read about its restoration.