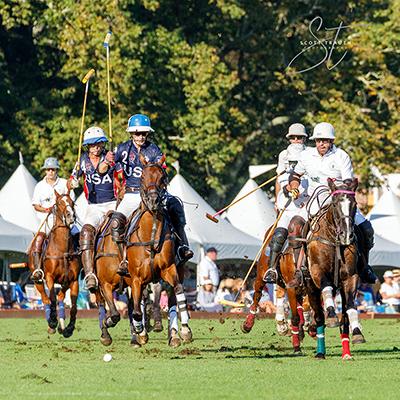 Anticipation for the re-match four years in the making reached fever-pitch on Saturday, September 18th when Mexico sent its top squad to face USA as the final international challenger in the 30th anniversary season of the Newport International Polo Series, presented by Turkish Airlines.  Conditions were ideal as the sky cleared to brilliant sunshine over the pitch with mild temperature just right for the players to give their all.  Eager fans were lined up before the gates had opened to take in the extended summer conditions.

Curious spectators made their way around the pitch to the player's corner to see both sides readying for competition.  Meanwhile, the Pro Shop was abuzz with new limited edition arrivals, including buttery-soft sweaters just in time for fast-approaching October.  Further along in the Vendor Village were Cocoa & Co. portraits for a souvenir photo of family & friends enjoying the match, handmade jewelry by Seeside Designs, and gourmet picnic fare and styling services from Stoneacre.

In the blink of an eye, it was 4PM, and umpires Patrick Quigley and Chris Fragomeni were escorting the luchadores onto the field to grapple for the silver Revere Bowl inaugurated in 2013.  The familiar cheeky voice of favored commentator, William Crisp, welcomed everyone to the second to last Polo Series match, before introducing the contenders.  Wearing navy for USA, Polo Series Founder, Dan Keating, took the #1 position, with Sam Clemens at #2, Rory Torrey at #3, and Dave Bullis sporting #4.  Mexico, in white, was represented by two-time Polo Series contender, Diego Aguilar at #1, with Daniel RodrÍguez at #2, Andrés Gonzales at #3, and Jamie Hanhausen at #4.  Himno Nacional Mexicano was followed by the Star Spangled Banner, then mixologist extraordinaire (creator of Newport Polo's specialty and VIP lounge cocktail menus), Jonathan Pogash, The Cocktail Guru, officiated the coin toss.  Mexico won, picking its starting direction and the ball was bowled into play.

Mexico faced the added challenge of playing on borrowed horses without the opportunity to get to know them thanks to rained-out weekday practice.  Still, the challenger made no bones about full-throttle play.  Torrey took the advantage for USA to score while Mexico took a beat to get comfortable on the pitch.  Then, all bets were off.  Mexico stepped up defense, and by mid-chukker, Aguilar tied the score.  Somehow, Torrey managed to sneak another USA goal just 9 seconds before the bell ended the first chukker.  Both teams traded places on the ropes as they grappled for control in Chukker two.  Finally, Keating fought his way to the Mexico goal, widening the USA lead.  Hanhausen, hit back to keep Mexico within one point, 2-3.  Mexico put USA in a hold in chukker three.  Gonzales landed the first goal several minutes in, followed by Hanhausen hitting his mark twice in the final two minutes, for a 5-3 Mexico lead at the half.

All in attendance were sure to turn in their door prize entry forms at the Pro Shop for the chance at a bottle of Veuve Clicquot Champagne, and the Turkish Airlines Grand Prize Drawing.  Tequila was the spirit of choice at the Patio Bar where a themed match cocktail was served in honor of Mexico.  Delicious bites from Newport Chowder Company, Stoneacre, and Hawaiian Jim's Shave Ice were all on the agenda before the match was called back to play.  Of course, the iconic half-time divot stomp was a must to repair the pitch for the next bout.

USA faced an uphill battle to make up the goal deficit.  Keating started the ascent, but Gonzales countered for Mexico.  Then, Mexico made a costly error on a USA drive in front of goal, serious enough to award a Penalty 1, automatic goal to USA.  Still, Mexico held the lead in chukker four, 6-5.  Clemens came out swinging for the home team in chukker 5, landing the tieing goal two minutes in.  Torrey raised the stakes as USA overtook Mexico for the first time since chukker two.  Undeterred, Gonzales made a daring drive to tie the match, 7-all.  A penalty conversion by Torrey started the final chukker, met by a goal during regulation play from Gonzales.  Clemens then took off on a streak that had Mexico on the mat, with two goals in quick succession, before landing a penalty conversion to cement the USA victory, 11-8.

Both teams circled the field for the celebratory fan salute before reuniting at the Veuve Clicquot Champagne Toast and Trophy Presentation where USA was presented with the winners' perpetual cup by team lodging hosts, Stacie Milles of Vanderbilt International Properties, and Newport Polo club member Peter Jenkins accompanied by his wife Mary Marwick.  By popular vote of the audience, Gonzales was credited as MVP of the match.  The Mexican players named Diva, owned by Dave Bullis, as the Best Playing Pony of the match.  Commentator Crisp presided over three cheers for both teams before everyone adjourned to the Goslings Players Hour at the Patio Bar.