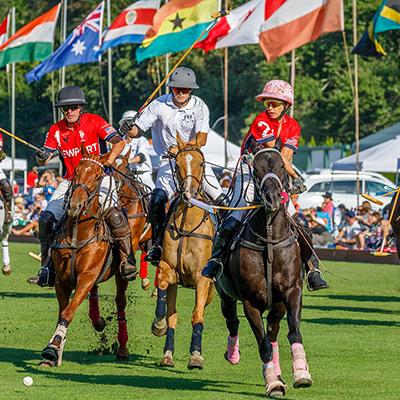 A bluebird sky and gentle breeze set the stage for the spirited Newport Pro-Am on Sept 11 as two teams of elite amateurs anchored by steadfast pros contested the 3rd to last match of the Newport International Polo Series 30th anniversary season, presented by Turkish Airlines.  Enthusiastic onlookers were dressed to impress, with smiles all around to revel in the throws of an extended New England summer.

As the clock counted down to 4PM, Polo Series founder, Dan Keating, ascended to the announcer's perch, filling in for the British wit of commentator William Crisp away on vacation.  Umpires Sam Shore and Chris Fragomeni marshaled the teams to centerfield where the home team was first to be introduced.  In red for Newport, the unshakable Rory Torrey traded his usual quarterback position for the #1 offensive jersey, while fan-favorite Minnie Keating played #2.  Sam Clemens would fill the captain's seat at #3 with the battle-tested Peter Freidman as the defensive #4.  The challenger, in white for Arizona, had Scottsdale native Julia Kline in the #1 position.  Dan Kinsella and Felipa Rojas, on loan from Newport, held the #2 position, while Jim Stanton was the playmaker at #3, and Argentine-pro Manuel Mazzochi completed the quartet at #4.

Keating called the audience to attention, taking a moment of silence to honor the 20th anniversary of 9/11 before the national anthem played out across the venue.  Newlyweds, Rachel and Sean Connelly, were given the honor of officiating the coin toss, won by Arizona who selected its starting direct to get the match underway.

Both sides jockeyed for position through the first minute until the home team got the upper hand, thanks to a goal by Clemens for an auspicious Newport start.  A tight contest ensued with neither side gaining the advantage again, until Mazzocchi brought it home for Arizona with a first chukker tie, 1-all.  Intense volleys resumed in chukker two until a bold play by Newport drew the umpires' whistle, giving Mazzocchi a free hit to put Arizona in the lead.  Then, an Arizona infraction gave Newport the window to tie again, fully used thanks to Torrey's accuracy.  Chukker 3 saw Mazzocchi take off like he had been pushed over the side of the Big Ditch (that's the Grand Canyon for the non-Arizonans), scoring from the first throw-in.  Newport deployed its sails to slow its opponent, but another Arizona windfall saw the team double its score to end the first half leading 4-2.

Onlookers took their turn on the pitch at half-time for the traditional divot stomp to smooth the field for the second half.  The official cocktail of the Newport International Polo Series, Goslings Dark 'N Stormy, was a popular choice and in stark contrast to the beautiful day at the Patio Bar.  New arrivals stocked at the Pro Shop were not on their hangars for long, while the stunning "PARADISUM" drew its own audience of bidders in the hotly contested auction ending September 30th.  A stroll through the Vendor Village brought more delights into reach, with souvenir polo portraits by Cocoa & Co, handcrafted nautical and equestrian jewelry from Seeside Designs, insta-worthy picnic spreads by Stoneacre, with Elevate Judo & Jujitsu meeting the community ahead of its opening on Aquidneck Island.  The fleet of Mobile Gourmets needed no other pull than the smell of confections on the air as Wally's Hot Dog Cart, Newport Chowder Company, Stoneacre, Hawaiian Jim's Shave Ice, and Chelsea's Creamery all served up their delights.

The anticipation of the fast-paced finale (and a little coaxing by the commentator) drew spectators back to their seats for the second half.  Newport's squad formed up to right the ship after losing course in the third chukker as Torrey sailed through goal within 30 seconds of the throw-in.  Mazzocchi scored again for Arizona, but was matched by Torrey, reeling the challenger in, which still held the advantage 5-4.  Both sides struggled to one-up the opponent in the penultimate chukker.  Finally, halfway through, Torrey hit his target to tie the match, but Mazzocchi didn't let it stand, maintaining the Arizona advantage, 6-5.  An all-out horserace unleashed in the final chukker as dueling goals kept the audience in suspense.  First, the hard-charging Mazzochi increased Arizona's lead 7-5.  Torrey narrowed the gap with a goal for Newport.  Mazzochi advanced Arizona once more, matched again by Torrey.  Finally, Stanton drove home Arizona's lead to end the match 9-7.

Both teams reunited at the Veuve Clicquot Champagne Toast and Trophy Presentation to share in the hardwon victories of the day.  Polo World Champion John Wigdahl presented the perpetual cup to the winning Arizona team.  Three cheers for the players ended the formalities as the players dispersed among eager fans of all ages for autographs and photos, before moving to the Patio Bar where the DJ was spinning classic hits to hold onto the last vestiges of summer.