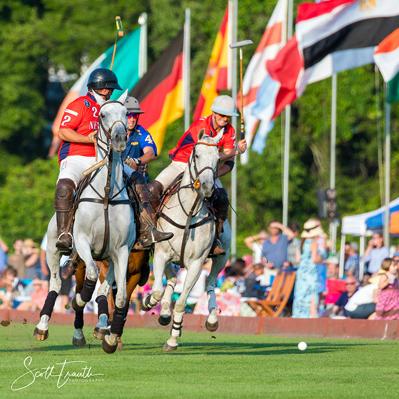 Competition is at an all-time high as the Newport Pro-Am returns to the polo grounds on Saturday, September 11th at 4 PM, culminating in one of the final three matches of the 30th Anniversary Season of the Newport International Polo Series, Presented by Turkish Airlines.

A unique aspect of the sport of polo is that even at the highest levels of competition, professional polo players often compete alongside highly skilled amateur players.  In Saturday's lineup, fans will witness visiting pros and high level amateurs challenging the home teams' local favorite pros and up-and-coming hotshots at their best in this fast-paced matchup.

Since the first edition of the Newport Pro-Am in 2015, the event has become a September fixture at Newport Polo, showcasing players and horses in seasonal peak form, in a performance of experience and pure talent that promises to be a thrilling game for spectators and participants.

"With the 2021 season of polo nearly over, all that’s on a players’ mind is the chance for another hard-earned victory in a memorable year of competition," states Polo Series Founder, Dan Keating, "with perfect weather on tap for ideal playing conditions, they will leave everything on the field."

Lawn tickets are available online and at the gates.  Standby Seating at 4pm Gametime includes Tailgates & Chalets offered at the Main Gate, and Pavilion upgrades at the Hostess Stand after the first chukker, with an admission purchase for Lawn seating.

The International Polo Grounds are located on the acreage of Glen Farm, 250 Linden Lane (off Route 138) in Portsmouth, RI, only minutes from Newport’s bustling harbor.  This bucolic setting on Aquidneck Island is easily accessible from the main thoroughfare, Route 138, for a picturesque landscape and pleasurable afternoon of polo spectating throughout the summer.  The property is the last 100 acres of a pre-colonial settlement from the 1600’s that became the Town of Portsmouth's original gentlemen's farm, an 800-acre manorial estate established during a Gilded Age movement of retreat from the high life into pastoral country acres.

Its classical 19th century stone barns and its park-like grounds were rehabilitated by Polo Series founder, Dan Keating in the early ‘90’s and continue to thrive as an equestrian & community recreational property, and home of the Polo Series. Read about its restoration.