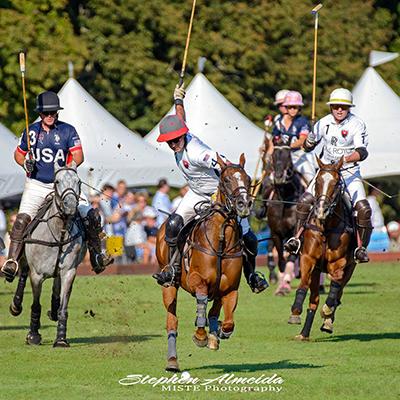 Anyone who put a tenner on the nation that spread polo to the world would have been nervous about their bet as USA vs. England unfolded on Saturday, September 4th, for the 30th anniversary season of the Newport International Polo Series, presented by Turkish Airlines.  This historic and much-anticipated rivalry traces its roots more than 100 years back to the founding of America's first polo club in Newport, RI, and the first international polo competition in the world when those buccaneering Americans challenged English army officers to a match.  The English came riding high after retaking the cup in 2019, but USA was equal to the task for a mallet to mallet duel.

A beautiful start to the Labor Day weekend made for pleasant picnicking as eager spectators lined the field to enjoy an afternoon under the warm September sun.  A duo of British excellence, the Rolls-Royce Cullinan and Bentley Bentayga, drew a sizeable crowd to the Herb Chambers Exotics Village for a gander at the rare autos.  A short stroll away, the Vendor Village was abuzz with enticing handbags and accessories from newcomer, Fleurissant Newport, alongside a collection of rarities offered from music and sports memorabilia to the ongoing art auction benefiting the Jeffrey Osborne Foundation.  Of course, a breeze through the Pro Shop for the latest team sportswear arrivals is always a must.  Gaiety on the field ensued 'till the stroke of 4PM when the familiar sound of The Queens English echoed over the PA as beloved Commentator, William Crisp, invited spectators to their seats for the match start.

USA came prepared to meet the challenge of one of its oldest polo rivals, fielding Minnie Keating in the #1 position.  Polo Series Founder and President Dan Keating held court at the #2 position, while fan-favorite Rory Torrey quarterbacked at #3, with the #4 position filled by Jim DeAngelis.  England's contingent included London-trained Michael Zacharski at #1, while borrowed American player Roger Souto filled a last-minute gap at the #2 position.  Returning champion hailing from the home of British Polo at Cowdray Park, Max Secunda, captained the team at #3, and Dominic State rounded at the team at #4.

God Save the Queen was followed by The Star-Spangled Banner as all in attendance stood at attention to the national flags waving at centerfield.  Then, Herb Chambers Exotics Marketing Director, Christine Scott, took to the field for the official coin toss, determining starting direction for the teams, before the umpires threw the first ball into play.  It wasn't long before the adept English captain Secunda saw through an offensive that earned them the first goal of the match, less than a minute in.  The epic struggle was underway with neither side budging an inch.  Finally, with fifteen seconds remaining in the first chukker, Torrey landed USA on the board for a 1-all tie.  This time, USA was prepared for an all-out first offensive as Torrey scored less than 30 seconds into chukker 2.  A defensive stalemate set in again that kept USA in the lead for most of the chukker until State drove home the 2-all tieing goal.  Both sides were prepared for an all-out blitz at the start of the chukker 3, blocking all attempts at goal until Secunda broke the stalemate halfway through the chukker. USA's resolve began to waver, leaving another opening for Secunda to end the first half with England leading 4-2.

Half-time brought spectators back onto the pitch for the time-honored tradition of treading-in, followed by a return to the Vendor Village to check on auction bids, then refueling with a refreshing drink from the Patio Bar and a gourmet treat from the local Food Trucks. Meanwhile, the teams strategized before mounting up for the second half.  The Stella Artois Best In Show judges had a dickens of a time choosing between the resplendent red and white displays, before settling on a group of exuberant tailgaters.  A last dash to the Pro Shop to turn in entry forms for a chance at the weekly Door Prize from Whispering Angel and the Turkish Airlines Grand Prize Drawing was made before the match was called back to order.

A rebalancing of power still saw England expand its lead, albeit through much resistance, 5-2 in chukker 4.  The USA squad finally found its Saratoga in the fifth chukker, holding off England while Keating and Torrey both advanced to score.  England still maintained its narrow 5-4 lead as the final chukker got underway.  Swift action by Torrey tied the match right out of the throw-in.  Secunda regained England's lead a minute later, which held until the halfway point when DeAngelis tied for USA once again.  A series of fevered volleys ensued until Secunda hit his target to clinch another victory for England, 7-6.

Both sides reunited for the fan-salute lap around the field, led by those featured British motors from Herb Chambers Exotics, before taking the podium at centerfield for the Veuve Clicquot Champagne Toast and Trophy Presentation.  Christine Scott of Herb Chambers Exotics presented the victorious England team with the perpetual cup and special kudos to Max Secunda as the high-scorer of the match.  This latest installment saw the historic rivalry draw closer, with slight advantage still to USA, 10 wins to 8 since 2000. Three cheers for both sides sent the players on to the Patio Bar for the Goslings Players' Hour where complimentary Dark 'N Stormies were the toast du jour.  A sumptuous Lobsterboil was laid out by the masters from McGrath Clambakes & Catering, while DJ AT set up the groove for a dance party that continued into the evening.