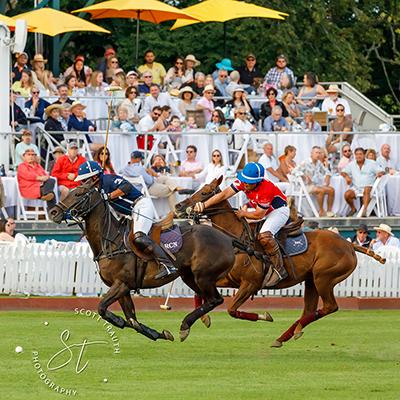 The Empire State struck back again on Saturday, August 28th for the 10th skirmish between Newport vs. New York for the prestigious Clarke Cooke Cup, during the 30th anniversary season of the Newport International Polo Series, Presented by Turkish Airlines.  The tenacious Newporters kept pace until the second half when New York unleashed overwhelming power.

A welcome break to the recent heatwave was matched by beautiful blue skies for ideal conditions to set the stage for an always epic contest.  Fifth Avenue fashions were on display as picnics were laid out under the last of the August sun.  Lawn games added to the pre-match entertainment, along with a stroll through the Vendor Village boutiques and a trip to see the ponies and players readying for the match.

Arrival for the challengers took more than a New York minute, thanks to a delayed ferry, but around 5PM the teams were led on to the pitch for player introductions followed by the US national anthem.  Newport had its perennial frontman, Roger Souto at #1, with Leo Mejia representing for his second match of the season at #2, power house Cote Labbe captained from #3, while steady vet Dave Bullis was at #4.  New York sent returning player Keith Hart for his third stint holding down #1, while newcomers Nick Aliano and Robert Neis played #2 and #3 respectively, and heavyweight Esteban Scott at #4.  Hey Rhody contributor and influencer Ingrid Brown executed the Official Coin Toss, then the ball was in play.

Early plays favored New York as the first team to score, thanks to Neis.  Then, Newport negated New Yorks offence, never making a goal for itself, but holding the first chukker 1-0 in favor of the challenger.  Chukker 2 saw Newport surge ahead with goals by Labbe and Mejia within the first minute of play.  A penalty hit awarded to New York broke the momentum when Scott made the conversion and followed up with a goal during regulation play to overtake.  Mejia saw to even the score with 3-all with a goal in the final 20 seconds of Chukker 2.  Play grew more intense with the end of the first half in sight.  Neiss scored the tie-breaker for New York, then a foul by his team gave Labbe the opening to even the score again.  Scott gave his team the edge as Chukker 3 ended with the advantage to New York, 5-4.

As the players vacated the field, spectators took over for the time-honored half-time divot stomp to smooth the playing surface for the second half.  With the field repaired, attentions turned to field-side hospitality, including a trip to the Pro Shop, not least of which to browse the latest arrivals, but also enter the Turkish Airlines Grand Prize Drawing.  Then, a visit to the Patio Bar for a refill before picking out delectable bites from A Mano Pizza, Stoneacre Bistro, Hawaiian Jim's Shave Ice, and Chelsea's Creamery.  Those thinking about back to school and continued education had the chance to visit the University of Rhode Island Foundation table.

The second half started out much as the first with an early goal for New York by Scott, followed by a desert of scoring to end the fourth 6-4 for the challenger.  Unlike the first half, Newport missed its rallying comeback.  New York steamrolled through like the Rockefeller oil conquest.  Neis pumped out 3 unanswered goals to the end the fifth chukker 9-4.  Newport capped the gushing well, but a final goal was surfaced again by Neis to end the chukker final and put New York on the winner's podium, 10-4.

New York was riding high following the fan salute lap of the field as the Veuve Clicquot Trophy Presentation got underway.  A special shout-out was given to Robert Neiss for scoring 6 of his teams 10 goals, before masters of hospitality from the Clarke Cooke House presented the vintage silver Clarke Cooke Cup to the victors.  Then, the cork flew, and the magnanimous Newport led three cheers for the visitors before adjourning to the Patio Bar for the autograph signing.