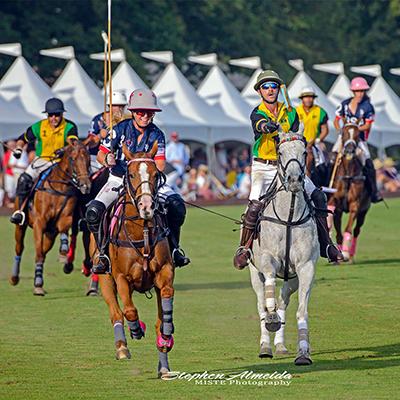 USA hit its stride early against perennial fan-favorite, Jamaica, as the world tour continues for the 30th anniversary season of the Newport International Polo Series, presented by Turkish Airlines. The looming threat of Henri could hardly be felt on Saturday, August 21st as brilliantly sunny skies shone over the polo grounds and enthusiastic spectators laid out field-side picnics.  While grills simmered and lawn games were thoroughly enjoyed, playing members of the Newport Polo Club gathered on the west goal line for the official 30th-anniversary portrait, before the USA squad prepared in haste to meet one of the toughest rivals of the season.

Black for the strength and creativity of the people, gold for the wealth of the country, and green for the lush vegetation of the island; the colors of the Jamaican national flag were on proud display around the field.  Pre-game fun included a stroll through the vendor village where the Jamaican Tourism Board tempted with the delights of the Caribbean.  Seeside Designs Jewelry and J Wilder Imports offered up the latest fashions, while the Pro Shop featured the latest team sportswear arrivals.  Topped off by a special silent auction of memorabilia, home decor, and an epic summer excursion to add to the $80K+ raised for Bon Voyage Ball beneficiary, Jeffrey Osborne Foundation.

Umpires Patrick Quigley and Chris Fragomeni marshaled the teams onto the field for opening ceremonies.  Anticipating a strong contest, USA fielded one of its most reliable lineups with the persistent Roger Souto leading offense at #1.  Followed by Minnie Keating filling the #2 midfielder position.  Heather Souto hitting all strides wore the play-maker's #3 jersey, while Polo Series Founder, Dan Keating, rounded at the squad at #4.  Jamaica trotted out veteran Charlie Chambers to represent his home country in the #1 position alongside newcomer Doug Henderson playing #2.  Beloved captain Shane Chin guided his team from #3 while another newcomer, Adam Laing, completed the 4 player team.  Players introduced and flags saluted during the national anthems, Newport & Boston based designer Sinesia Karol completed the coin toss to start the action.

Minutes in the first chukker ticked by as neither side could finish a goal with the defensive players sweeping the ball to safety yards from the goal-line.  An unrelenting charge from H. Souto finally broke the stalemate halfway into the chukker.  Then an H. Souto repeat put USA at a 2-0 advantage.  Chukker 2 really let loose the cannons as full-gallop plays devoured the length of the field.  Chin was undeterred by the USA lead and quickly put Jamaica on the board.  Then, both Soutos tag teamed for 1-2 scoring that kept USA's advantage, 4-1.  Chin once again kept his team advancing, drawing the first goal of chukker 3.  But, USA's relentless defense cleared the way for H. Souto and D. Keating to end the first half with the home team leading 6-2.

Half-time brought spectators to the field to replace divots churned up by the horses for a smooth playing surface to contest the second half.  Surprise guests representing the Jamaican Bobsleigh Team made a special appearance, seen trotting out as a foursome amid the crowd.  Jamaican Me Crazy rum punch doled out ice-cold refreshment from the Patio Bar, alongside frozen libations, and other signature sips.  All manner of gourmet delicacies were served by, A Mano Pizza, Wally's Hot Dog Cart, Stoneacre, Newport Chowder Company, Sweet B's Donuts, Chelsea's Creamery, and Hawaiian Jim's Shave Ice.  Door prize entries poured in to the Pro Shop for a chance at the Whispering Angel picnic giftset and eye on the Grand Prize from Turkish Airlines to be awarded during the Turkish Airlines Finals.  Meanwhile, Stella Artois Best In Show judges waded through the sea of red & white displays to find the ultimate field-side party.

USA maintained its steady climb as the second half got underway.  Two minutes into the fourth chukker and H. Souto sent another dead-accurate drive across the goal line, followed again moments later by R. Souto.  The Jamaican Bobsleigh visit finally took effect as the challenger froze USA's advance in the fifth chukker.  Thanks to Chin and a pair of goals from Chambers, Jamaica got on the fast track to catching the USA as teams made the final horse change with the home team still leading, 8-5.  That slick ice proved a detriment to Jamaica as the final chukker got underway.  This time R. Souto instigated USA's scoring machine, padding the lead with two more goals.  Chin took full advantage of a penalty hit to convert Jamaica's sixth goal until the final bell signaled the match end and another USA victory.

According to Napoleon, in victory, you deserve champagne and in defeat you need it.  In that spirit, the teams mounted the trophy podium following a fan salute lap of the field perimeter for the Veuve Clicquot Trophy Presentation.  Olympic-style commemorative medals were presented to the visiting Jamaican Polo Team as a gift of thanks for traveling to Newport to meet USA's challenge.  The perpetual cup was then awarded to team USA by Victoria Harper of the Jamaican Tourism Board, with three cheers echoed out for both teams and a champagne toast to revel in the camaraderie of the day.

Festivities continued at the Davitt Pavilion Patio Bar where the Gosling's Players' Hour saw much glad-handing and autograph signing.  Special gifts from Jamaica were handed out by the visiting players to eager fans.  Lively rhythms by Dj ATam set the mood while the smell of Jerk meats and authentic sides by Humming Bird Newport drew Après Polo ticket holders to the buffet.  Hours of dancing passed by while the preparations to brace the Polo Grounds for the arrival of Henri went largely unnoticed.