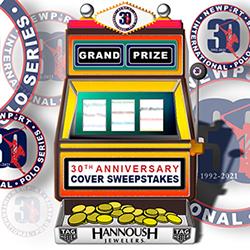 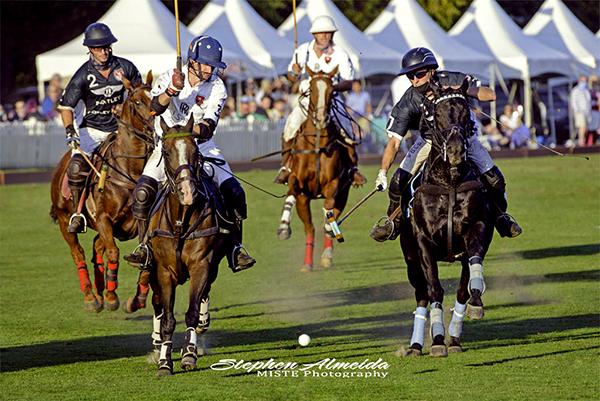 Stephen captured this image during the Herb Chambers Exotics Finals on September 26, 2020.

From the Photographer: The cover shot was taken at the last Polo match of the season, which featured Bentley versus Rolls Royce. Luke Merrick was driving towards the goal for Bentley, with Sam Clemens defending for Rolls Royce. I choose to shoot mostly from behind the goal, where this shot was taken. It's my favorite point of view. Experiencing those magnificent and powerful animals charging right at you is exhilarating. The skill of the riders to control the horses and the ball at the same time never ceases to amaze me. Add to that the outstanding job Newport Polo does putting on the matches, and there's plenty of fun to be had by all!

I'm a freelance photographer, specializing in Sailing Regattas, Sporting Events, landscapes and Wildlife. My favorite part of photography is that I share that passion with my wife Michele. She has been a professional photographer for many years and graciously took me under her wings. Together we are MISTE Photography. We have covered many sailing events like the Chicago Yacht Club Race to Mackinac, Americas Cup, Volvo Ocean Race and many others. The speed and elegance of yacht racing is exciting. It's also what draws me to photographing Polo matches. The strength, speed and agility of the horses and players is breathtaking to watch.

And equally exciting, a Grand Prize drawing from among those who voted for this cover image, awarded a luxury Swiss-made Tag Heuer Aquaracer Watch, courtesy of Hannoush Jewelers.  Out of hundreds of participants from 21 states, congratulations goes to the winner chosen at random, Terry Tinkham of Portsmouth, RI!.  Tinkham remarked that he has come full circle, winning a Bose Wave Radio door prize at one of our early matches nearly 3 decades ago. Watch the video below for his reaction when Jonathan Silva of Hannoush Jewelers called Terry to congratulate him.  As a bonus for participating, all voters received a special discount, good for 30% off one regular priced item from Hannoush Jewelers.

Our Season Program published this year will be the 27th edition in partnership with the Rotary Club of Newport.  Since the inaugural year, 100% of revenue from ad sales has supported the Rotary Club of Newport's charitable works.  The program has raised hundreds of thousands of dollars over its history for scholarships to support college-bound high school seniors and many other significant charitable initiatives that endow the needs of the community.  Ad space within the 2021 program is available for reservation until April 23rd at this link.  The program is produced by Newport This Week.

We extend our greatest appreciation to our dedicated corps of photographers who chronicled the thrill of polo in its American Birthplace over the past year and whose work will grace the cover and inside pages of the official Season Program: Cocoa & Co., JBK Photography, John Lincourt Photography, Kevin M. Bernard, Michele & Stephen Almeida - MISTE Photography, Rod Harris, and Scott Trauth Photography.

The 30th Anniversary season of the Newport International Polo Series is scheduled to begin on Saturday, June 5, and continues every Saturday through the end of September.  Witness the action field-side as the home-team, USA/Newport, takes on weekly challengers from home and abroad, featuring exciting polo competition in one of New England's most popular outdoor summer events.  After a proven game plan during the pandemic year that won State approval and audience support, momentum for the approaching milestone season is bullish, to celebrate three decades of polo re-born in its American birthplace.  Subscribe to our eMagazine to receive the latest updates delivered to your inbox.