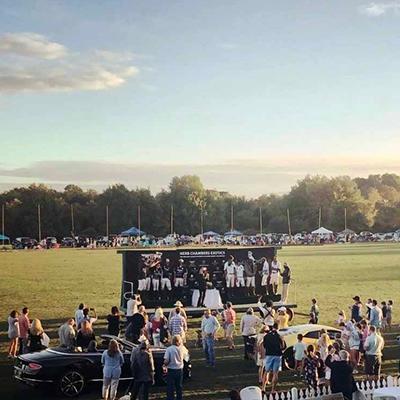 Herb Chambers Exotics will add to the 30th anniversary season of the Newport International Polo Series, bringing the horsepower of its factory-authorized Bentley, Lamborghini, Rolls-Royce, Alfa Romeo, and Maserati dealerships to the team.  Polo match attendees can expect to spot the unique mix of the most luxurious, high-performance vehicles at the polo matches on Opening Day, June 5 for USA vs. Switzerland, July 10 for USA vs. Italy, August 7 when USA meets the Dominican Republic, and September 4 for USA vs. England in 2021, and all the associated events held in and around Newport during these summer weekend highlights.

2020 first coralled these pedigree marques to the polo grounds in a climactic Exotics Village exposition during the final match of the year.  Pictures with the showcase cars were a highlight, of course, with the brand experts from Herb Chambers answering questions, ending in a victory lap farewell parade with the players.  New features are planned for 2021 and will be announced through the 30th anniversary rollout.

The history of The Herb Chambers Companies dates back to 1985 and owes its success to its owner, the celebrated Dorchester entrepreneur and U.S. Navy Veteran, Herb Chambers. Herb Chambers purchased his first dealership in New London, Connecticut, after having a substandard experience himself. His vision was to provide a better experience, and it became the foundation for the Herb Chambers Companies. His strategy was so effective, his business quickly rose up the ranks and found itself among the leaders in the American market.  With 60 dealerships and 3 collision centers as a part of its network, the company still remains one of the top 20 dealership groups in the nation.

The 30th Anniversary season of the Newport International Polo Series is scheduled to begin on Saturday, June 5, and continues every Saturday through the end of September.  Witness the action field-side as the home-team, USA/Newport, takes on weekly challengers from home and abroad, featuring exciting polo competition in one of New England's most popular outdoor summer events.  After a proven game plan during the pandemic year that won State approval and audience support, momentum for the approaching milestone season is bullish, to celebrate three decades of polo re-born in its American birthplace.  Subscribe to our eMagazine to receive the latest updates delivered to your inbox.