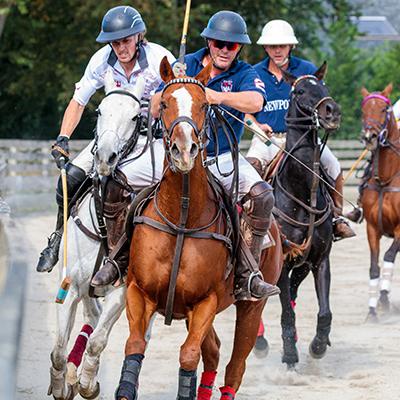 Four teams of top contenders descended on Newport to compete for one of the oldest arena polo trophies in the U.S. on October 12 - 13, 2019.  On the line was the George C. Sherman perpetual trophy, inaugurated in 1934 to honor the father of arena polo.  Synergy Solutions narrowly wons its berth in the championship round, going on to beat the home team, Newport, in the Final round to earn its place in US polo history as the 2019 champions.

"It's a great honor to host this historic tournament for the third year in a row," commented Dan Keating, Westchester Polo Club (Newport Polo) president and Club Delegate to the United States Polo Association (USPA).  "As the first polo club in America, we share George Sherman's pioneering spirit, and look forward to welcoming new competitors to take part in this event each year."

Day One featured the Semi-Final matches to earn a place in the Championship round.  Team matchups were made by random draw, pitting Acoaxet Polo (Charlie Bullis, Ula Green, Dave Bullis) against Newport (Lauren Bilsky, Rory Torrey, Dan Keating). A few two-pointers kept the teams in lock-step with only one goal between them at the start of the final chukker.  Newport dug deep and managed to pull away, 16-12, earning the first position in the Championship.  Next up, Synergy Solutions (Luke Merrick, Minnie Keating, Anna Winslow Palacios) faced Avalon Farm (Margaux Buchanan, David Eldredge, Amanda Poor Roberts) in the second Semi-Final match.  Avalon Farm won the first goal and continued strong offensive drives, but couldn't overcome the dynamic trio that drove Synergy Solutions to a 10-7 victory.  Following the competition rounds, the teams adjourned for a waterfront lobsterboil under starry skies.

Day two competition brought Acoaxet Polo and Avalon Farm to play for the bronze finish.  This time Acoaxet Polo led the first half in scoring, but a torrent unleashed by Avalon Farm brought it into the lead by the end of the third chukker.  Fortunes reserved once again when Acoaxet Polo rallied in the final chukker to take the 3rd place finish, 14-11.  Then, it was on to the final event when Synergy Solutions faced Newport to achieve ultimate glory.  Synergy Solutions clung to a narrow lead during the first two chukkers before surging ahead in the third.  Newport's modest comeback was not enough as the final bell signaled Synergy Solutions as the reigning champion.

Following the Championship Round, Peter Poor, USPA Governor at Large presented the George C. Sherman Memorial trophy to Luke Merrick, Minnie Keating, and Anna Winslow Palacios.  By unanimous vote of the team captains not in the Championship, Anna Winslow was awarded MVP.  Best Playing Pony judge, Peter Poor, awarded the honor to Missy, played by Anna Winslow Palacios, owned by Dan Keating.  Merrick is a graduate of Culver Academy and Colorado State University where he was a member of the men's polo team, now working at Newport Polo.  Keating is now a two-time winner of the Sherman Memorial and a Certified Polo Instructor at Newport Polo.  Winslow Palacios is a National Intercollegiate Polo Champion, member of Team USPA, currently working for an equine supplement brand outside of Albany, NY.