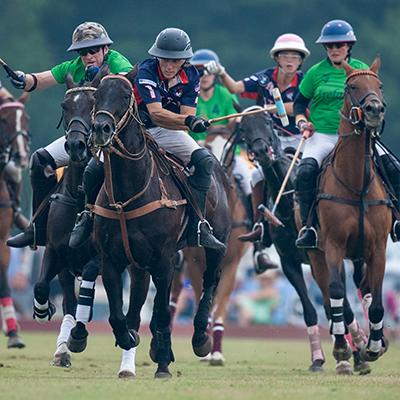 Ireland blitzed USA in a spirited match on Saturday, July 6th, to reclaim the perpetual trophy for its 28th appearance in the Newport International Polo Series XXVIII, Presented by Brahmin.

Ireland began its offensive before the match had even started, waging a psychological campaign against USA with a helicopter field drop by Newport Helicopter Tours. Surrounded by shamrocks and children dressed as leprechauns, both country's national anthems rang out following the introduction of the players.

Ireland arrived in Newport ready for victory after last year's match ended with an 8-7 win for USA. Strong defense on both sides neutralized any attacks on goal during the first chukker.  Herbst, who has captained the Irish team since 2002, was first to forge a path to goal, ending the second chukker 1-0.  Ireland's offensive continued at the start of the 3rd chukker when Heffron scored twice more.  USA re-grouped and sent Merrick into the fray, coming out with their first goal of the game, ending the first half 3-1 for Ireland.

Both teams turned up the heat at the start of the second half.  Finnegan brought Ireland up to a 4-1 lead, but Bullis countered to win another goal for USA.  Herbst had the last word, ending the 4th chukker with another goal for a 5-2 Ireland lead. The teams kept the pace up through the 5th chukker, going tit-for-tat.  Herbst led the charge for Ireland, followed by one from Merrick.  Then, Herbst made Ireland's 7th goal but Bullis split the posts just before time ran out to end the chukker 7-4 in favor of Ireland.  USA shifted momentum in the final chukker when M. Keating won the first goal. Herbst finished off the match with two more goals, ending the game with a 9-5 Ireland win.

The match concluded with the Veuve Clicquot Champagne Toast & Trophy Presentation, as well as an autograph signing to meet the players. The 1992 USA vs. Ireland perpetual trophy was presented by Bill and Cheryl St. George who hosted the Ireland team during their stay in Newport.

During the match, a lucky individual from North Kingstown won the Athena Tote from Brahmin in the weekly door prize drawing and an automatic entry into the Turkish Airlines Grand Prize Drawing at the Finals to win a trip for 2 anywhere in the world!  Also, during the match, the Stella Artois Tailgate Contest awarded a fabulous prize to a lively group of spectators

While in Newport, the Ireland players enjoyed many of the best attractions and highlights in the City by the Sea, including VIP ground transportation from Rockstar Limo; an aerial tour from Newport Helicopter Tours; a glorious afternoon sail with America's Cup Charters; sightseeing via scoot coups courtesy of Scooter World; paddle boarding with Island Surf and Sport; a team dinner & dancing on the eve of the match at the one and only Clarke Cooke House, and all the great goings on in the City by the Sea.

"Polo is an international sport, played in over 80 countries around the globe," stated Dan Keating, captain of the USA squad. "we are honored to have teams traveling great distances to play in Newport."

The Newport International Polo Series is proud to present its 2019 sponsors including Brahmin, Davitt Inc, Turkish Airlines, TD Bank, Boston Common, Gurney's, The Vanderbilt, Hotel Viking, The Chanler, Vanderbilt International Properties, Clarke Cooke House,  Stella Artois, Rockstar Limo, Atria Senior Living, Goslings, McGrath Clambakes and promotional partners that entertain our visiting teams including the International Tennis Hall of Fame, America's Cup Charters, Newport Helicopter Tours, The Cocktail Guru, Newport Mansions, Island Surf and Sport, and Scooter World. Special thanks to Schultz Marketing Partners, Van Liew Trust, Tanglewood, and WCRI, Classical Rhode Island. “Our sponsors have been with us since the beginning. Without their support, the Series would not be as extensive as it is,” explains Dan Keating, Polo Series founder.