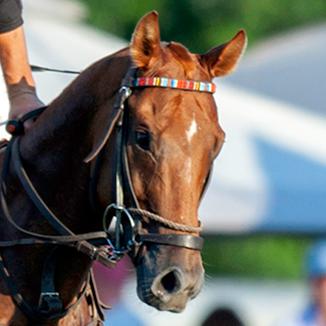 It is said by the greatest players that a polo pony is 75% of a player's handicap.  All season long, the international challengers that bring their best game to Newport ride borrowed ponies, on an unfamiliar field, in front of a live audience of many thousand spectators.  No pressure, right?  At the end of the match, the visiting teams gather around the trailers to decide which of the loaned horses gave the best advantage on the field.  This year, a breakout star claimed the spotlight, Tarzan, a 9-year-old off the track thoroughbred.

Tarzan started his life as a racing hopeful, but after several disappointing races, he was put up for sale.  Newport Polo president, Dan Keating, and his daughter Minnie brought the lanky 5-year-old to Newport and began the lengthy investment of training a new horse for the string.  Tarzan certainly showed spirit on his first day at the new farm.  As soon as he was turned loose in the paddock, he reared up on his hind legs and beat his chest with his front.  The show earned him the moniker of king of the jungle, Tarzan.

After two years of daily drills, training with other young horses, and then eventually playing in team practices, Tarzan set foot on the Saturday field.  Minnie played Tarzan in several 2017 matches, and then he was ready to join the 2018 starting lineup.  Today, Tarzan is known for being compact but mighty.  It is a perfect combination in polo allowing fast turns while having the required muscle to win defensive plays.  Out of the 8 international challengers in 2018, two named Tarzan the Best Playing Pony, more than any other horse this season.  The honor was bestowed by England and India, a great achievement considering that England is the quintessential polo nation and India is where the game of modern polo got its start.

Be on the lookout for #19 next season.  Like a fine wine, polo horses only get better with age. 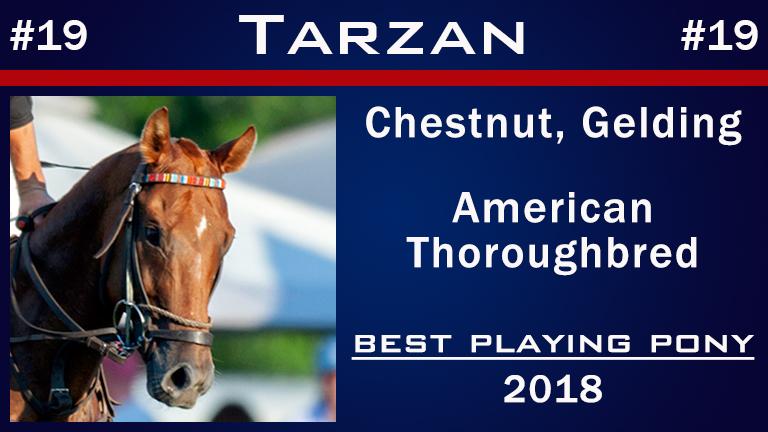