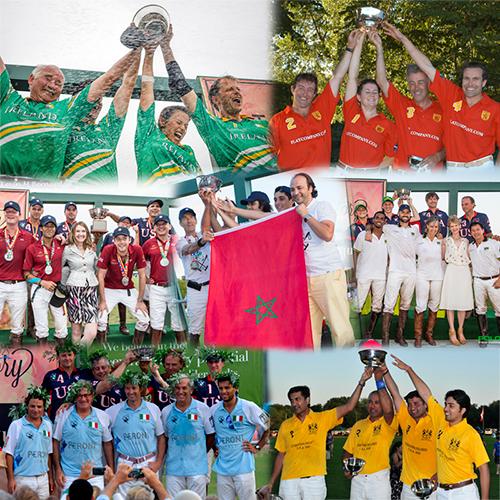 The Newport International Polo Series XXVII brings together the top polo playing countries to challenge Team USA on its home turf in Newport.  A new international challenger will make its debut in the season opener, while the return of European favorites and a top team from polo's modern birthplace capture the Sport of King's major hubs.  Morocco will headline this season as guests of honor at the 18th annual International Polo Charity Ball, defending its debut victory against Team USA on the following day.  Read more to learn about the teams and the history of polo in each country.

Opening Day, Saturday, June 2nd, will feature an international debut as the newest nation to appear in the Polo Series challenges Team USA.  Sign up to receive our monthly Emagazine for the latest on the 2018 team lineup.

The Scottish Polo Team is hardly all bum and parsley, leading team USA 7 wins to 6 since its debut in 2004.  USA narrowly edged victory to keep the perpetual cup in 2015, but the Scotts have proven that if they keep the heid on June 16th, they can ride off triumphant.  Dine with the teams following the match at a special Aprés Polo event (haggis not included).

Leaving la dolce vita for an American holiday, the Italian Polo Team returns to Newport on July 7th for another chance at claiming the elusive USA vs. Italy perpetual cup.  The team, led by captain Marco Elser, hails from Rome, home of the oldest of Italy's 15 polo clubs.  Italy’s modest polo community is gaining notoriety on the world stage, hosting international tournaments and besting England for bronze in the 2011 FIP World Championship.

One of the longest-running rivalries in the Polo Series, Ireland steps out for its annual jig on July 21st, returning with captain Siobhan Herbst and top players from Wicklow.  The team is happy as Larry after besting USA at its Wicklow home in a 2017 New Year's tournament, and again during its annual engagement in Newport.  USA will have to field its top players to meet the challenge of the prolific polo nation. Join the teams after the match for a traditional Asado Lamb Roast.

Morocco headlines the social highlight of the Newport season as guests of honor at Midnight in Marrakesh, the 18th annual International Polo Charity Ball.  After a night of philanthropy and revelry at Newport's famed Rosecliff mansion, Morocco will return to the Polo Series field on August 4th for a rematch against Team USA.  Polo was first established in Tangier in 1899, on Morocco`s Mediterranean north coast, already famous for its pleasant climate, horses, riders, and native tradition of Fantasia, equestrian performances inspired by historical wartime attacks of Berber and desert knights in Morocco.  The sport blossomed after Morocco gained its independence from France in 1956, and with a royal endorsement by Morocco’s King Mohammed VI, Morocco became the first Arab and African member of the International Federation of Polo in 2006.  Don't miss the most popular Aprés Polo event of the season, our annual Lobsterbake, after the conclusion of the match.

The beloved Jamaican Polo Team with long-time captain Shane Chin will make its 19th challenge to Team USA on August 18th. Much like other polo playing nations, the sport was established by British army officers in the late 1800s.  Today, polo in Jamaica is a family affair, with the sport being passed down through the generations.  Their skilled horsemanship and world-renowned hospitality has drawn noteworthy visiting players and is opening the sport to a new league of Jamaicans.  Each season, the Jamaican team brings one of their up-and-coming players in an effort to break USA's stronghold on the perpetual cup.  Join the teams after the match for an Aprés Polo Jerk Grill.

Labor (or Labour in the Queen's English) Day weekend brings the redcoats back to U.S. shores for the annual USA vs. England match on September 1st. The armada that sailed on Newport last season carried off the perpetual cup, ending a two-year USA shutout.  The quintessential polo nation is coming in hot after a bronze finish over USA in the 2017 World Polo Championship, ready to take 'The Colonies' again this season.

The Indian Polo Team, last seen dancing the night away at the Taj Ma Ball in 2009, makes its triumphant return on September 15th.  Polo in its modern guise developed in India, where, after seeing the game played by locals, British military officers established the first polo club in 1859.  India draws global competitors each year to vie for the oldest polo trophy, the Ezra World Cup, and its national team narrowly missed a spot in the World Polo Championship finals.  Ready to defend its 2009 victory, the royally sanctioned team includes Raghav Raj Singh, 8th Maharaj Sahib of Shivrati and the nation's top players.  Savor the flavors of India after the match at a special Aprés Polo event.