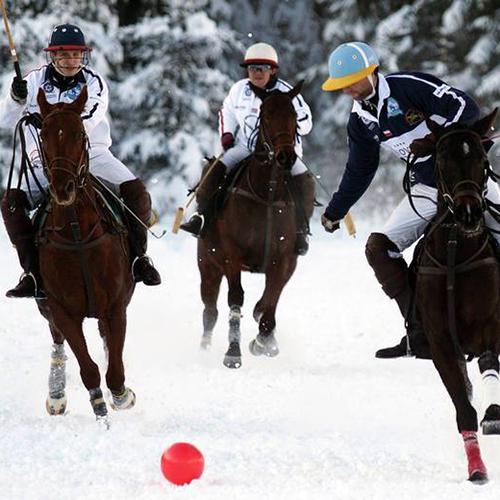 Eleven years and counting, the Bukovina Snow Polo Masters has risen to international prestige, attracting teams from around the world that ascend the Polish Alps for 4 days of intense competition in the snow.  Team USA, officially sanctioned by the U.S. Polo Association, is led by 7-year snow polo veteran and local Newport player, Alexander King, along with his Newport Polo teammates who will face 7 of the world's top challengers.

The alpine weekend centers around the picturesque resort village of Bukowina Tatrzanska, offering up exciting polo action as spectators watch on-high from the terraces of the Bukovina Resort.  Off the field highlights include a thermal swimming pool, and exciting post-polo events, including a private fashion show by one of Poland’s top designers.

Bukovina Snow Polo Masters is distinguished as the only international snow polo event dedicated to competition between amateur players.  Played in the style of arena polo, teams of three compete in a 400’ x 150’ outdoor frozen, snow-covered arena, in the high altitude conditions of the Tatra Mountains.  Footing made from compacted snow makes play technically challenging.  Quick reflexes and expert riding skills are put to the test by uneven and changing surfaces conditions that can send the ball bouncing in unpredictable directions, with more frequent changes in possession of the ball.

While snow polo is played using arena rules, Newport International Polo Series faithful will recognize familiar concepts like the line of the ball, players using their horses to push competitors out of the way, and hooking competitors' mallets to gain control of the ball.

A few key differences between grass and arena polo include:

The basic rules of the game are:

Get updates on Team USA's progress in Poland on our Facebook page & in the next issue of our monthly Emagazine.