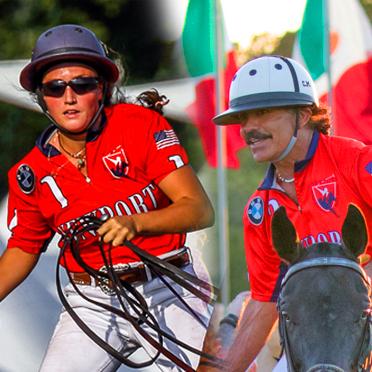 Newport Polo’s annual Players Dinner on Oct. 21st at Clark Cooke House in Newport gave opportunity to celebrate the 2017 polo season and recognize those who contributed to an outstanding year.

International Polo Charity Ball ovations were expressed to the 2017 Gala Ambassadors Mary Marwick & Peter Jenkins and to the dedicated auction committee volunteers present, including Heather Souto, Jim DeAngelis, Margaux Buchanan and Agnes Keating, who helped raise a record $32K supporting beneficiary Newport Opera House, and to all our generous attendees this year, without whom the results would not have been so successful.

The presentation culminated in an induction into the Newport Polo Hall of Fame: none more deserving than the beloved consulier in the early years of Newport Polo's vision to revive America's first polo club and reinstate its heritage of international competition, Commander Jack B.L. Leavitt, who led the Newport Rotary Club’s Polo Committee, was on our board of advisors since the second season, recognizing an opportunity to help Polo and the Rotary Club.  Jack’s vast business expertise helped Polo get on its feet, and navigate through its early challenges, without whom we might not be here today to celebrate our 26th season.  Jack Leavitt and his legacy will forever be acknowledged in the Newport Polo Hall of Fame.”

“The awards dinner is an opportunity to express appreciation for the leading figures that make the Polo Series a great tradition,” commented Newport Polo president, Dan Keating.  “Plans are already underway to make exciting improvements for 2018.”