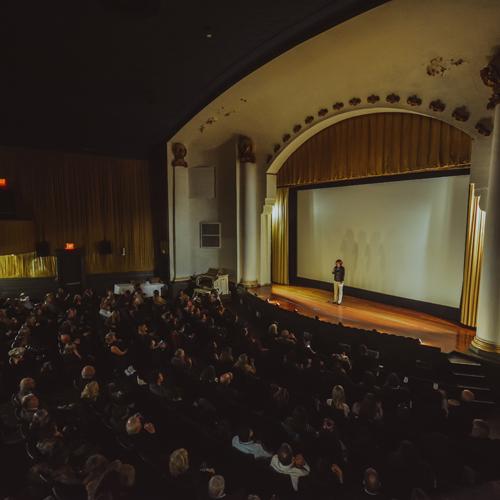 A packed house at the Jane Pickens Theater enthusiastically received the premiere of Sacred Ground, the independent film that encapsulated the 25th year in the life of the Newport International Polo Series, with throwbacks to its grass roots beginnings.

Nearly 300 attendees shrugged off the threat of a stormy night during the Newport Winter Festival, to be a part of the historic one-night engagement at the community’s beloved art house cinema, celebrated for ushering in the age of motion picture and debuting hit after hit for more than 90 years.

In the house were Ameses and Rockefellers, RI film industry moguls, the polo playing genre from the Westchester Polo Club and other clubs throughout New England, and loyal fans of the Polo Series.  In the span of an hour, the film engaged the lively audience, prompting cheers and ovations.  The Polo Series' popular William Crisp mc’d a Q&A afterwards with film makers Kevin Friend and Jason Carter.

After much glad handing, the crowd moved on to a cocktail celebration at Forty 1 North to conclude the evening.  View the album from the evening, courtesy of Michelle Oeil Photography.

“This was a unique opportunity to present the World Premiere of veteran film makers Kevin Friend and Jason Carter, and to bring quality art and entertainment to the Newport community,”  adds Kathy Staab, owner and curator of the Jane Pickens Theater & Event Center.  “And we enjoy being supportive of RI Filmmakers.”

Since its big screen debut, Sacred Ground has aired throughout New England on CSN in a two-part mini-series, reaching 4.8 million households in the region.  Additional TV broadcasts are scheduled in other regions and US markets, and web based presentations are in the works to reach beyond US borders.  Sacred Ground will also be submitted in various film festivals later this year.