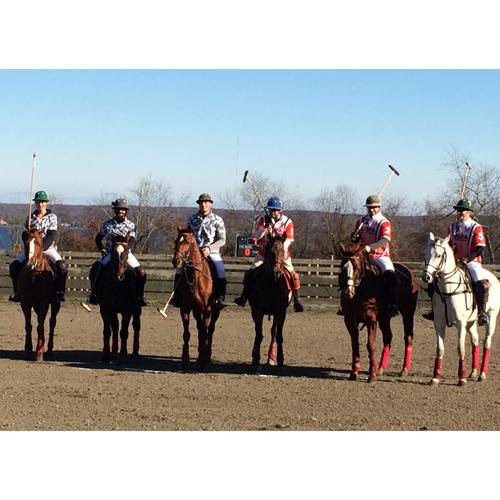 Competitive players from near and far migrated to Portsmouth to strut their stuff in the fourth annual Thanksgiving Arena Polo Tournament on Sunday, November 27, 2016.  Under fair weather conditions, the one day tournament drew three teams for a heated round-robin competition.

Precision defense was the name of the game on Sunday. Playing only two heats against each rival team, every goal was on the line as the win/loss record would determine the champion. Team B made a strong showing at the outset with a win over Team A, while Team A and C fought to a tie. Down to the final round, Team B was leading overall as the final chukker against Team C began. Team C made a strong play to start, carrying its early advantage to soundly defeat Team B.  Team C's win turned the tables in the overall standings, earning them top honors in the tournamnet.

Following the match and in the spirit of the holiday, players and spectators gathered to enjoy some hospitality and revel in the camaraderie of the day.

Discover Polo! Watch it, Play it, Support it! The change in seasons launches Newport Polo’s arena polo league, lessons, Intro Clinics, competition chukkers and tournaments for players at all levels to get in the game. High school teammates face-off with regional rivals, and Brown U returns for intercollegiate competition. Newport Polo offers weekly polo lessons with open enrollment for new players. Click Here for the brochure.