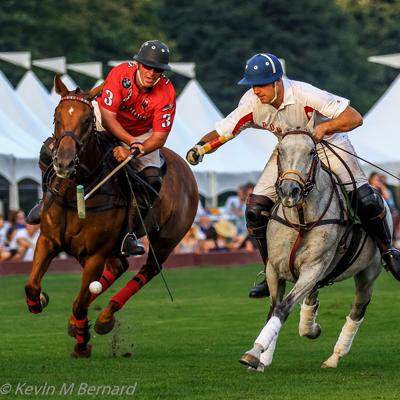 Newport faced its most formidable nemesis on Saturday, August 13th in the NBC-10 Newport International Polo Series, presented by the Rhode Island BMW Centers.   Since its Gilded Age beginnings, polo in Newport and New York has been forever linked, producing the fiercest competition each season.

Defending for Newport was Heather Souto at #1, Sam Clemens at #2, Rory Torrey playing #3, and Dan Keating at #4.

It was a promising start for team Newport as Souto made a lightning play out of the lineup to score for the home team. They lined up for the next throw-in, and Souto again started a drive toward goal, coming up a little short, but Keating was there to finish the play.  Newport’s brief lead didn’t last as Puch scored two goals, followed by another from Eddy.  Souto leveled the score, 3-all to end the first chukker.  The second chukker saw a huge New York advance with 4 goals by Eddy, raising New York’s score to 7.  A beautifully executed penalty by Torrey added the only point for Newport.  Newport slowed the New York advance in the third chukker, but Eddy managed two more goals, ending the half 9-4 in favor of New York.

Newport regained its opening vigor to start the second half. Two goals by Torrey, and a third from Souto started to close the gap, while Eddy was held to one goal, ending the chukker with New York leading, 10-7.  Keating got the fifth chukker underway, raising Newport’s score to 8, but the unstoppable Eddy added two more points for New York.  Torrey picked up the torch for Newport with another goal, but Puch had the last word for New York.  Down by four goals, Newport had the final seven minutes to break New York’s three year winning streak.  Torrey made the first move, scoring for Newport, but Eddy powered to goal, scoring twice for New York.  Torrey managed one more goal, but the clock ran out on Newport’s chance at victory.  Once again, the New York claimed the silver with a 15-11 victory.

During the match, a lucky winner from N. Kingstown took home an official team jersey in the weekly door prize drawing, and a beautiful sunset tent near the scoreboard won the Best Tailgate Picnic Trunk from Stella Artois.  Following the match, the City Cup was presented to the teams by Suzanne Turcotte of ALEX AND ANI, during the Veuve Clicquot Champagne Toast and Trophy Presentation.