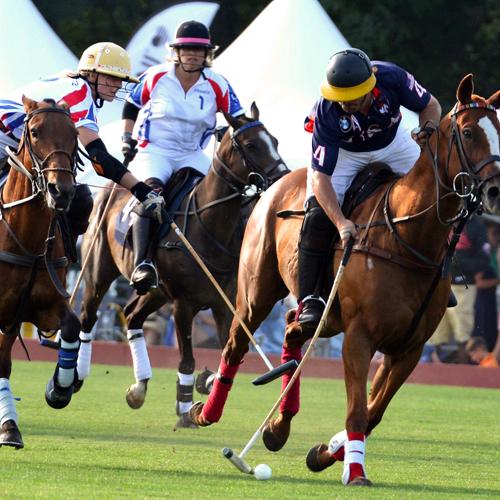 After an 8 year hiatus, France made its celebrated return on Saturday, August 6, 2016.  Hailing from the sun soaked Côte d’Azur, the team’s American visit was a tour de force as they squared off with team USA in the NBC-10 Newport International Polo Series, presented by the Rhode Island BMW Centers.

Representing France, Sophie Granchi was at #1, Capucine Granchi played #2, Michel Granchi was in the captain’s seat at #3, and Olivier Girard closed the back door at #4.

Team USA dominated the first half, taking the early lead to open the match with two impressive goals from Torrey.  M. Granchi wasn’t about to let USA have a closeout round, and put up the first goal for France to end the chukker.  Both teams played tight defense in the second chukker with a USA goal by Torrey matched by Girard for France.  USA gained momentum to pull away in the third chukker.  Two field-devouring shots from Torrey split the posts, with another USA goal by Keating.  C. Granchi tried to make up for lost ground, adding a goal for France, but the bell ended the half, 6-3 in favor of USA.

Warmed up from the first half, France returned with a vigor, determined to defend its 2008 victory.  Girard and C. Granchi brought the team neck and neck with USA at 6 all, while keeping USA from goal through the 4th chukker. The teams remained in a dead heat through the 5th chukker, as two points added to the USA score by Torrey were match by Girard and S. Granchi.  With the score at 8-all, the teams returned to the field to see who would break the stalemate.  A torrent of scoring by C. Granchi & M. Granchi gave France a 3 point lead.  Torrey took the opportunity to add another goal for USA, but M. Granchi had the final word, scoring the final goal for France to end the match in a 12-9 win.

A weekly door prize drawing for a magnum of champagne from Veuve Clicquot was awarded to one lucky winner from Dartmouth, MA, and tailgaters in spaces 36 & 37 won the prized Tailgate Trunk from Stella Artois.  Following the match, the USA vs. France perpetual cup was presented to the teams by Theodora DelGuidice of Forty 1° North, during the Veuve Clicquot Champagne Toast and Trophy Presentation.  The French Polo Team bestowed Best Playing Pony honors on Jack, a chestnut gelding owned by Dan Keating.  Hundreds stayed on to feast on an authentic New England Lobsterbake dinner prepared by McGrath Clambakes.