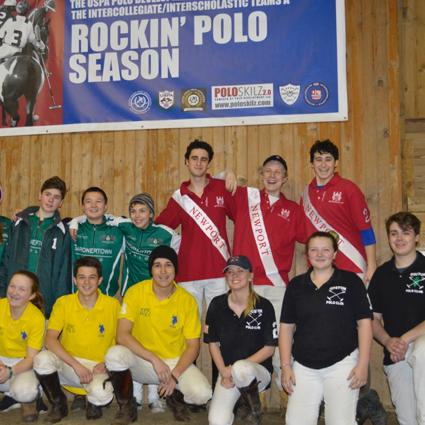 The Newport Interscholastic Polo Team earned a berth and competed in the United States Polo Association’s Northeast Preliminary Tournament at the Gardnertown Polo Club Arena in Newburgh, NY on February 6-7,

Competing for the second year for Newport were Miles Schuman at #1, Alden Schuman at #2 and Liam Griscom at #3, all hailing from the Williams School in New London, CT.  Also playing for Newport this season was Rohan Sampath, who was unable to compete in the tournament.

The tournament was won by Bloomfield Polo, advancing to the NE Regional Tournament at UConn later this month, from which the winner will represent the Northeast region at the US National Championship in March,.  Also playing in the Prelim were Boston Polo School and host Gardnertown II.  Newport put forth a valiant effort against Bloomfield in the opening round of the tournament but was outgunned by the more experienced team, and then was neck and neck against rival Boston Polo who edged them by a point before the buzzer.

The Newport Interscholastic Polo Team includes boys & girls in grades 7-12, and welcomes interested new students. Teams compete against other teams in the Northeast during the autumn semester, and participate in winter tournaments organized by the United States Polo Association. Coaching and instruction is provided by Dan Keating at Newport Polo’s (private) instructional facility in Portsmouth, RI throughout the year, including summer Youth Polo Camp. “We hope these kids continue to play polo while earning a degree at one of over 40 universities in the US that offer polo programs,” explained Dan Keating, founder and president of the Newport Polo Club.