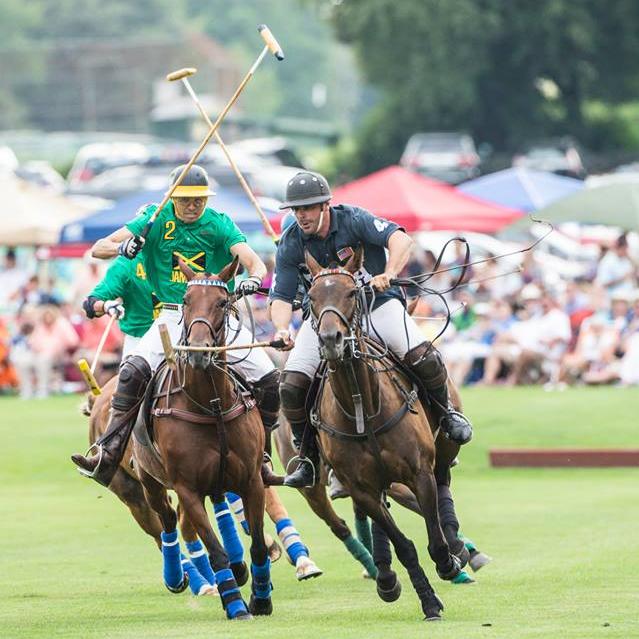 The field seemed stacked against Team USA, but old friendships threw the visiting team a curve for the 11 – 9 USA victory on August 22 at 5pm in the NBC 10 Newport International Polo Series, presented by your Rhode Island BMW Centers.

Rhode Island BMW Centers offered a pre-match warm up with test drives in their latest 2015 models including the M4 & M6 convertibles, 435xi Gran Coupe, X6 xDrive50i, and the all-electric i3. Next-door, Cox Communications hosted a hospitality tent featuring an authentic Jamaican cooking demonstration and tasting, paired with a selection from Entwine.

Jamaica took an early lead 4 – 2 with goals by all four of the players, only met with a penalty conversion by Torrey and a goal during regular play by Bullis for USA. USA put the stops on Jamaica in the second chukker, with strong defense keeping the team from goal while doubling their score, making a 4 all tie. The invigorated Team USA took the lead with goals by Torrey and D. Keating. Chin slowed the advance with one goal to end the first half 6 – 5 in favor of USA.

A third chukker injury for Rousseau put him on the sidelines, and Peter Friedman in the game at number 1 for Jamaica to start the fourth chukker. Two costly penalties and a goal in regular play widened the USA lead, matched only by one goal from Chin. Friedman got to work for Jamaica in the fifth chukker with one goal, while the Jamaicans held USA to its two point lead. Two perfect penalties by Torrey saw USA widening the gap, while two more goals by Chin were not enough to tip the scales. USA triumphed 11 – 9, reclaiming the USA vs. Jamaica perpetual cup.

During the match, a weekly door prize drawing from Rockport awarded one lucky fan from Connecticut a pair of Rockport shoes, and group from Milton received the Best Tailgate picnic trunk from Stella Artois for their amazing cooking, warm hospitality, and beautiful buffet presentation, topped by Birds-of-Paradise.

After 6 periods, the match concluded with the Veuve Clicquot Champagne Toast & Trophy Presentation, presented by Jeannie Sullivan, general manager of Clarke Cooke House, accompanied by her three grandchildren, and autograph signing and cocktail hour to mingle with the players, before a Jamaican Jerk Grill dinner satisfied the players and their fans.