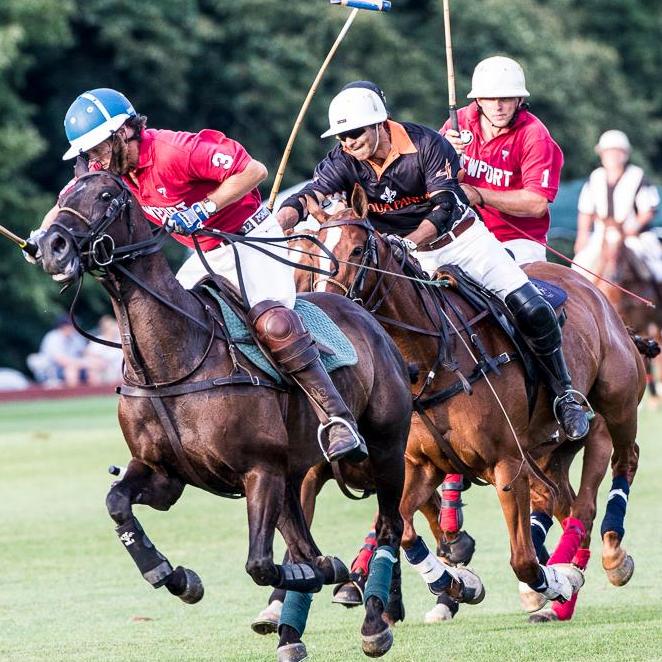 It was a sea of red, white and blue as spectators flowed into the polo grounds, celebrating our nation’s freedom with an all-American celebration as the Newport Polo Club went head to head in a friendly face off between “The Red States” vs. “The Blue States” for the Independence Cup on Saturday, July 4. The Red and Blue States kept it close throughout the 6-chukker match, but the Reds pulled ahead in the final chukker with a winning score of 11 to 8.  The match was part of the NBC10 Newport International Polo Series, presented by your Rhode Island BMW Centers.

Representing The Red States was Michel Nseir at #1, Miss Minnie Keating at #2, Sam Shore at #3, and our beloved president Dan Keating at #4. Sporting blue for The Blue States was Julie DeAngelis and Bridget Torrey at #1, Sam Clemens at #2, Heather Souto at #3, and Jimmy DeAngelis at #4. Making an appearance was Persia in the opening chukker, a young pony named by one of our fans in last year's Newport Polo "Name Our Pony" Facebook contest.

The Red and Blue wasted no time in the first chukker as Shore scored two goals for The Reds, one on a penalty hit, and Clemens scoring one point for Blue. The scores kept rolling in the second chukker as both Clemens and Julie DeAngelis struck points for Blue but Shore accepted the challenge and scored two more points for Red before the bell, with one point on a penalty hit. The girls took charge in the third chukker as Torrey and Souto both scored a point for The Blue States. But leave it to Pres. Keating to sneak in one last point for the Red team, tying the score just before the bell, and ending the chukker with a half-time tie of 5 to 5.

Both teams strategized at half time, and The Blue States came out charging the Reds in the fourth chukker with Julie DeAngelis, Souto and Clemens all delivering the ball through the posts. The Reds refused to retreat, held defense, and Nseir slipped a point through before the bell. The Reds continued to fire back in the fifth chukker as the Keating father-daughter duo took lead, both scoring points for The Reds, and Shore following close behind with support and a third point before the bell. The Red States kept swinging into the sixth chukker landing two more points by Nseir and D. Keating, holding out the Blue, and ringing the liberty bell with a final score of 11 to 8.

Meanwhile the Best Tailgate prize of a Picnic Box, sponsored by our friends at Stella Artois, was awarded to a “Heather Souto Fan Club” themed tailgate party, and one lucky spectator was awarded the weekly door prize from Rockport. The 2-hour match concluded with the Veuve Clicquot Champagne Toast & Trophy Presentation of the Independence Cup by Tom Maxfield and Chris Anderson of Balfour Beatty Communities , followed by autograph signing and cocktail hour to mingle with the players.

For highlights or full-length videos of the match, visit our Youtube Channel. For photo albums, please visit our FB fan page, or the web pages of our photographers: Matthew J Atanian; Rod Harris; and Dana Bibeault.

Discover Polo! Watch it, Play it, Support it. Newport Polo hosts the Newport International Polo Series XXIV, and is the home of America's first polo club, est. in 1876, (a founding member of the United States Polo Association offering public exhibition matches, polo club member services for grass & arena polo, and polo instruction year-round. Information about Newport Polo's spectator events, polo lessons, and sponsorship can be found on these web pages, using the links at the top of this page, including About Newport Polo.