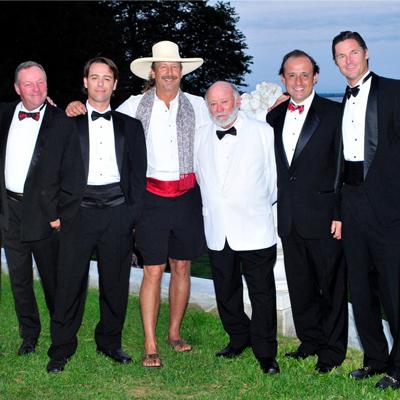 The Newport International Polo Series is very pleased to announce that $17,000 was raised at the 11th annual International Polo Charity Ball, benefitting the Dr. Martin Luther King Community Center of Newport County.  Proceeds of the live and silent auction are earmarked to secure a needed new commercial freezer for the privately funded beneficiary’s soup kitchen and food pantry.

The evening’s theme of Con Mucho Gaucho -  a celebration of the legendary South American cowboy and all things Chilean, was a nod to guests of honor, the Chilean Polo Team.  Nearly 300 attendees stopped for a photo-opp by Ferretti Group’s luxury Riva yacht at the entrance to Rosecliff, one of Newport’s finest Gilded Age mansions, before joining the ‘sold out’ black tie crowd on the terrace for a sunset view of Rhode Island Sound and refreshments.

Guests were dashing in black tie and dinner jackets, and shimmery couture gowns, as well as accents in keeping with the evening's theme.  Spotted in the crowd were Bostonians Jack and Honey Keating, Abby and Peter Friedman, New Yorker Pierre Merle, Esquire, the Palm Beach crowd including John Wigdahl, Peter Rains, Linda Baker, Anna Tate, and Newporters Tom Eberhardt, Stacie Mills, Carol Swift, Bill Rudkin, Tom Cahill and Maura Lindsay, Peter and Babette Wild, Byrne Callahan and hislovelySwissbeauty, Liz and Emlen Drayton, who auctioneered, the Chilean Polo team from Curico and Santiago, and countless other celebutantes along with nearly the entire Newport Polo Club and all its polo dilettantes from far and wide.

The annual charity gala is one of the highlights of Newport’s summer polo season, attracting polo players and enthusiasts from across the US and overseas.  The festivities continued into the night and continued late the following afternoon at the Newport International Polo Series where USA faced Chile in its 8th appearance in the Series for a thrilling match that resulted in 11-8 USA victory.  Following the match, the legendary McGrath Clambake Co. prepared a field-side lobster bake for more than 100 guests.

Currently, in its 20th year, the Newport International Polo Series has raised nearly $300,000 for civic and charitable organizations through fundraisers, benefit matches and donations supporting a long list of worthy nonprofit organizations in our community.  For more information about donations or fundraising events, visit our website: www.newportinternationalpolo.com

“We support a number of worthy civic and charitable causes each season and will strive to do so into the future, by interlocking the fraternity & international character of the sport of polo with its relevance to our community, following the compass and spirit of our predecessors” states Dan Keating, Polo Series Founder & President, explaining that “When the game of polo first took root on American soil in Newport in 1876, industry pioneers, and civic & business leaders embraced the sport and created a special pastime that brought our citizens together for wholesome recreation, entertainment and boundless goodwill.  Our goals remain the same today, to bring the world closer by hosting teams from every continent, bring our families & friends together with this unique brand of entertainment, and be stalwart in responding to the needs of our community.”

Rosecliff, a gilded age mansion, and museum, is one of Newport’s most elegant properties of the Preservation Society of Newport County.  Commissioned by Nevada silver heiress Theresa Fair Oelrichs in 1899, architect Stanford White modeled Rosecliff after the Grand Trianon, the garden retreat of French kings at Versailles. After the house was completed in 1902, Mrs. Oelrichs hosted fabulous entertainments there, including a fairy tale dinner and a party featuring famed magician Harry Houdini.